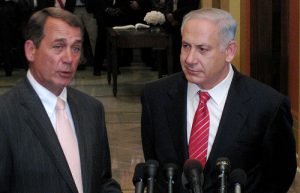 When even Fox news takes Boehner to task over the scheduled March 3 visit by Netanyahu, you know he has stepped over the line. Convenient that this scheduled speech is also only a few days before the Israeli election.  A foreign leader, Netanyahu, snuck around behind our president’s back in an effort to circumvent a deal with Iran that could prevent an all-out armed conflict and to boost his ratings back home.

The word Chris Wallace used in the video below, “wicked,” is exceptionally strong and also accurate. Here is the backstory: Boehner announced that he had invited Netanyahu to come speak to a joint session of Congress in late February (later pushed to early March) on Obama’s nuclear negotiations with Iran, which both Boehner and Netanyahu oppose, and which Republicans are seeking to blow up by forcing new, deal-killing sanctions on Iran.

What made this such a remarkable breach is that Boehner had reached over Obama to make the invitation, which he and Netanyahu kept secret from the White House. That is a major breach in US foreign policy, which is supposed to be unified; things like official visits by heads of state almost always go through the White House. It could also be seen as interference in the Israeli elections since presumably the opposition party will be none too happy about this electioneering stunt. I firmly believe the U.S. should stay out of foreign elections and politics and they should also stay out of ours. What Boehner did was reprehensible and damaging to U.S. interests.

In an interview with CBS 60 Minutes after the State of the Union speech Speaker Boehner said he had given the White House ample warning. Since when does a few hours constitute warning? He should have asked the White House before Netanyahu was ever contacted not after the fact like a petulant brat.

Scott Pelley: Mr. Speaker, the day after the State of the Union Address, you invited the Israeli Prime Minister Benjamin Netanyahu, a critic of the president’s foreign policy, to come to speak to a joint session of Congress. You blindsided the White House with that.

Inviting a foreign leader to speak at the Capitol without even informing the president, let alone consulting him, is an usurpation for which there is no recent precedent that I can think of.  Why would anyone ever think it is a good idea for Congress to ask a foreign leader to address Congress solely to criticize a sitting U.S. Presidents’s foreign policy? Nothing good will come of this.

Is John Boehner a Traitor?

The Logan Act (18 U.S.C.A. § 953 [1948]) is a single federal statute making it a crime for a citizen to confer with foreign governments against the interests of the United States. Specifically, it prohibits citizens from negotiating with other nations on behalf of the United States without authorization.

Congress established the Logan Act in 1799, less than one year after passage of the ALIEN AND SEDITION ACTS, which authorized the arrest and deportation of ALIENS and prohibited written communication defamatory to the U.S. government. The 1799 act was named after Dr. George Logan. A prominent Republican and Quaker from Pennsylvania, Logan did not draft or introduce the legislation that bears his name, but was involved in the political climate that precipitated it.


The Logan Act has remained almost unchanged and unused since its passage. The act is short and reads as follows:

This section shall not abridge the right of a citizen to apply, himself or his agent, to any foreign government or the agents thereof for redress of any injury which he may have sustained from such government or any of its agents or subjects.

The speaker of the House is a powerful position and is third in line to succeed a president but he does not make foreign policy. This was nothing more than a political stunt so Boehner could thumb his nose at the president and Netanyahu could boost his ratings in Israel right before the election. Congress has a role to play in foreign affairs, but they cannot go behind a president’s back like this because it makes the United States look weak and very divided. This is not the message you want to send to Iran. Boehner is a buffoon and an idiot. Boehner simply wanted to try and look strong to the Tea Party by pulling this stunt. It is no secret the Tea Party are not fans of Boehner so perhaps the Crybaby of the House thought this was a great way to build up his conservative street cred. Instead he comes out of this looking like a huge jackass and even managed to piss off some at Fox News which is very hard for a Republican to ever do.

In the video below between Chris Wallace and Shepherd Smith, Wallace had this to say:

“To make you get a sense of really how, forgive me, wicked, this whole thing is, the Secretary of State John Kerry met with the Israeli Ambassador to the United States for two hours on Tuesday, Ron Dermer. The ambassador never mentioned the fact that Netanyahu was in negotiations and finally agreed to come to Washington, not to see the president, but to go to Capitol Hill, speak to a joint session of Congress and criticize the president’s policy. I have to say I’m shocked.”