The Georgia Board of Regents is probably the most powerful entity in the state. They control billions of the state budget yet operate without any oversight and practically no transparency or accountability. In fact they control close to $8 billion of our state budget. Even more troubling is there appears to be a pattern of silencing whistleblowers by simply denying all appeals without even being read. 97% of appeals are summarily denied and a scant few are ever even read or reviewed on merit. If a lawsuit will likely fail it is dismissed and the facts and allegations aren’t even investigated or submitted to the Board of Regents for any sort of discussion or review.

Global Watchdog has followed this controversy at the University System of Georgia and the Board of Regents carefully and have compiled a long list of important cases that deserve wider attention by the media. But with the massive amount of advertising budget the USG has on local media don’t expect other media to give this scandal any coverage.

WHO ARE THE BOARD OF REGENTS? 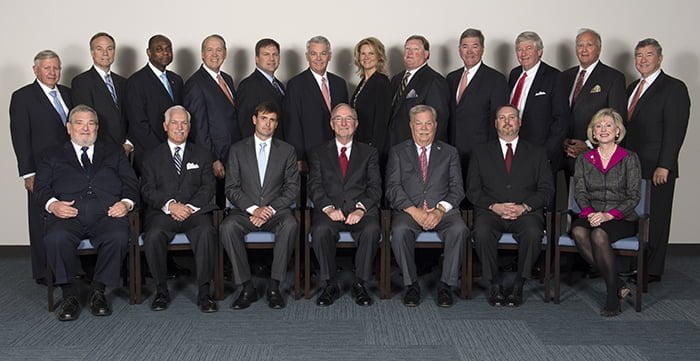 Out of 19 members it sure was nice to offer two positions to women and one position to an African-American. Does that look representative of the state of Georgia you live in? Georgia has roughly 51% females and around 31% black citizens, but you certainly wouldn’t know that from that photo where you would assume the whole state is made up of old rich white guys.

It shouldn’t surprise you that other states have a far more balanced and reasonable approach when selecting board members. Some states even require no more than half the board can be from one political party, no more than two can be graduates from one university, and they must represent all parts of the state. In Georgia all you need is to be friends with the Governor or should I say be a big donator to the Governor. The AJC reported that members of the most powerful state boards all helped bankroll Nathan Deal’s reelection and in return he reappoints them to the boards. Nice little tit for tat among the wealthy board members who use their positions for personal gain and glory and the politicians. 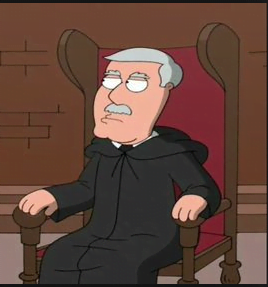 It appears Carter Pewtershmidt of Family Guy acclaim is a member of the Georgia Board of Regents You can see what appears to be Carter seated second from the left in the photo above. I think Carter actually personifies what many people feel is the personality of the board given the rate of the rejection of appeals as well as the mostly old rich white guy composition. They seem to be a collectively wealthy and heartless group selected mainly because they donated to a Governor’s election bid and not because they deserve to be on such a powerful board that controls $8 billion and have seen tuition rates rise far higher than other states and merger mania among schools. The reason I say heartless is due to the numbers of lives that have been destroyed by people being fired or students being expelled unjustly while the Board sat there and didn’t even read their appeals.

97% of Appeals to the Georgia BOR Are Denied; Most Unread

From the Vice-Chancellor’s own mouth, unless you have an appeals case that is likely to result in a successful lawsuit against the Board you are more than likely wasting your time. It won’t even be read by other regents. Given their immunity and the difficulty of even suing the University System of Georgia at all, your chances of ever having a meritorious lawsuit are slim to none. One Regent named Doreen Stiles Poitevint admitted this in a deposition.

In a video, Burns Newsome and another Regents Board attorney agreed to a very rare short interview. In the interview they admitted their main priority was keeping the board and state from being sued and not actually reading or considering the appeals based on merit. Jeff Chirico, the interviewer, pressed them to answer whether sometimes these interest conflict and how they could possibly be considering the interest of the fired employees with a 97% rejection rate.

The board attorney answered  “Why would they. No, they never do. The best interest of the Board of Regents is to not have to lose cases in court”

Newsome defends the 97% denial of appeals rate by saying terminations are being handled properly. He continues on by saying “there is no constitutional right to have a hearing before the Board of Regents. The board of regents appeal process is entirely discretionary”

Many of the people who feel they were unjustly fired said their lives had been destroyed. They were blacklisted from the profession they love and will likely not ever be able to find work in that field again. Many sank into deep depression, lost their homes and even their marriages due to the stress and financial ruin.

When only 3% of appeals actually are approved there is a systemic problem. The other 97% of appeals will receive the standard form letter after it has been determined you cannot sue them because of Sovereign Immunity. This applies to students who may have been expelled without just cause and well as for employees who have been fired by a capricious boss. Your value to the USG at least in terms of your appeal seems to be limited to how meritorious a case you represent as a potential lawsuit.

I find this extremely disturbing. Why even bother to have the pretense of an appeals process in place at all that will allow people to have some hope. Many think the Board is their advocate and they will receive justice or at least a fair chance to have their side heard. Think again since appeals aren’t even being read.

They are summarily dismissed if the student or employee can’t sue. Is this truly who we are as a nation? Is this who we are as a people? The sheer callousness on display in the interview with the two board attorney’s answers shows a level of complete disconnect to the people who are appealing as human beings. To my eyes at least they seem dispassionate and heartless and absolutely no emotion at all is shown.

From a Pavlovian, or classical conditioning standpoint, there is what Dave Grossman has termed the Reverse-Clockwork Orange process. In the movie, Clockwork Orange, a sociopath is injected with a drug that makes him nauseous and he then is exposed to violent movies. Eventually he comes to associate all violence with nausea and is somewhat “cured” of his sociopathy. We often say that children become desensitized to violence after spending thousands of hours watching violence on TV. The U.S. military quickly learned that switching from bulls eyes target to lifelike targets in shooting practice drills made for far more effective soldiers since they would never be attacked by a bullseye on the actual battlefield.

Is this rigid and unfeeling legalized rejection of all appeals based on nothing more than lawsuit meritocracy their version of desensitizing the Board of regents to the fact that these are actual human beings whose lives are being destroyed? Instead they become a case number to be sent a form letter after decades of service.

I would strongly urge the Board of Regents to actually start reading these appeals and even better interviewing these people in person. Give these people a fair chance to plead and make their case. Maybe many were justifiably expelled or fired. But it is highly improbable that 97% of them were justifiably rejected.

Yes it is true in Georgia you can fire someone because you don’t like the color of their shoes, but that does not make it right. You might also find the people behind those those expulsions or firings may in fact be the ones who need to be fired.  Unless we have a system where whistleblowers have a guarantee they will not be fired for coming forward and doing the right thing we have no hope of restoring faith in the University System in Georgia as little more than an anachronistic friend’s of the Governor club.

Given the lack of protection for whistle blowers as evidenced by the people in these articles, what possible incentive would any potential whistle blower have to come forward and report financial irregularities or other misconduct against a boss that can fire them with the knowledge that 97% of people who appeal will be rejected? My advice to anyone even considering becoming a whistle blower is keep good documentation and make sure if you do decide to move forward the Board of Regents would view your case as a loss in court.

Otherwise, if you like your job, for the time being at least it appears the best course of action is to play deaf, dumb, and blind. This is how the Southern Mafia likes it and don’t expect any changes anytime soon. They have all the cards and they will not make any reforms willingly. With allies like Governor Deal and Attorney General Sam Olens supporting this secretive and powerful cabal the chance of any change is practically zero.

Just ask Denise Caldon from Macon, GA who had her life destroyed for reporting a University President at Macon State…