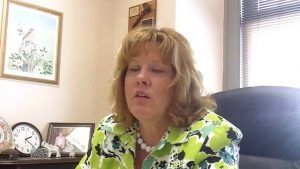 Georgia has no shortage of inept, corrupt, and just plain embarrassing politicians. But thanks to Samantha Bee, the host of Full Frontal on TBS, one especially vile and repugnant politico named Senator Renee Unterman (R) Buford, GA got her just comeuppance on national TV.

Unterman decided she didn’t want a bill that would address a massive backlog of rape kits to pass. Keep in mind some of these kits had been sitting in storage for many years. Unterman never explained any cogent reasons for her obstinance and still hasn’t to this day. Many surmise it was because she wanted to get full credit and hated the fact that someone else had initiated the bill. This heartwarming video below explains how one extremely persistent Representative named Scott Holcomb (D) along with some help from Senator Elena Parent (D) and House Speaker David Ralston (R) managed to go around Unterman to get it passed with very little time left on the legislative clock.

This isn’t the first time I have written about Senator Unterman. My previous article contains the original Samantha Bee video from last year as well. In that article I wrote about the time she lobbied to have Fibromyalgia cut from a list of permitted conditions listed on Georgia’s nascent medical marijuna bill. Thankfully this year that too has been rectified thanks to those conditions finally being added in a new bill. Unterman is reported to have told one particular advocate with Fibromyalgia that “it is not a real condition.” Keep in mind she was a nurse and knows better or should know better. I wonder if her motives might have something to do with her fat salary from Amerigroup who would surely oppose competition from a plant from which they can’t earn revenue .

When Unterman is not shilling for pharmaceutical companies, health insurance companies, and medical industry lobbyists as a thinly disguised representative of the people of her district, she is a highly-paid executive for Amerigroup, a billion dollar a year Medicaid contractor for the State of Georgia, that direct manages patient care. She is the Chairman of the Senate Health and Human Services Committee.

Interesting to note: Unterman began her employment with Amerigroup in 2005, the same year it was awarded its contract with the state. What an odd coincidence. This was also a fact Unterman neglected to add to her bio until pressed on the issue by media. Then she misrepresented the year she began employment until that was revealed to be untrue as well.

Of additional interest, Unterman never abstains from voting on any bills that the casual and not so casual observer would consider a conflict of interest. This may be because Unterman was instrumental in crafting ethics legislation when she served on the Senate Ethics Committee right before she became Chairman of the House Health and Human Services Committee. As always, its really important to follow the money here. Amerigroup, Anthem, Blue-Cross/Blue-Shield and how legislation will impact state funds flowing to those companies through contracts. Medical cannabis and the number of conditions included in a legalization bill; chronic pain and other conditions were most likely dropped from the bill under pressure from pharmaceutical and health insurance lobbyists because of the reduced revenues from the higher volume of patients in these condition groups. She is a slimy politician of the worst caliber. I hope Samantha Bee makes her an ongoing project until she is recalled, resigns, or is voted out. It’s a shame she’s had 19 years as a career douchebag in the General Assembly.

I will  end this article with a desperate plea from the people in Underman’s district to please run against her! I thought I would also share some a few of the hundreds of responses on Twitter that I thought were especially apropos and hilarious. Please note that these Tweets are a response to Unterman’s disjointed rant in the Georgia Senate on the last day of the session.  Notice not once did she say anything about her stalling the rape kit prosecutions, only about being offended by the F word in the cartoon. Renee might want to have someone with a better grasp of English help her with her speech next time as well.