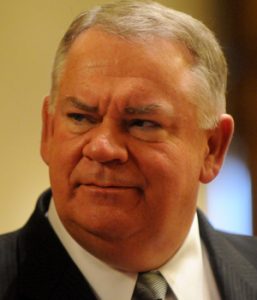 ATLANTA, GA –If you think the current State Bar of Georgia investigation into actions of House Speaker David Ralston might reach significant conclusions, think again. In June 2014, the bar filed 9 misconduct charges against Ralston in regards to stalling the case of client, Paul Chernak for years. Those charges are only a tip of an iceberg in decades of more serious claims. By April 2014, civic leaders had already sought Ralston’s resignation on other matters at a Capitol press conference.

In June 2015, the Georgia Supreme Court selected Mark Dehler of Hiawassee as special master to oversee the Ralston bar investigation. Dehler is married to former Secretary of State, Cathy Cox, who now heads Young Harris College. They gave over $34,000 to political campaigns including $750 to Ralston but there is more.

On May 3, 2002, Cox entered into a $54 million contract to purchase unlawful electronic voting equipment. Georgia code mandated at the time that: “Such voting systems shall be required to have an independent audit trail for each vote cast.” The state acknowledged there is no independent audit trail during a 2006 VoterGA lawsuit filed against unverifiable voting on behalf of all Georgians.

In 2009, the Georgia Supreme Court ruled against VoterGA on all counts, denying a trial although 40 facts were in dispute. They stated: “voters must assume the risk of necessarily different procedures” between unverifiable Election Day voting and verifiable absentee ballot voting. Plaintiffs still claim procedures are unnecessarily different and violate equal protection clauses in Georgia and U.S. Constitutions.

The Ralston investigation is another recent development linked to the unverifiable voting machines. In April, the ethics commission selected Stefan Ritter as its new Executive Director. Ritter is the former Assistant District Attorney who was the opposing counsel in the VoterGA lawsuit. Last year, the ethics commission paid over $3 million to four former employees who filed wrongful termination lawsuits. They were fired, demoted or pressured to conceal evidence in the investigation of Governor Deal’s campaign finance activities.

Georgia ranks as America’s most politically corrupt state according to the Center for Public Integrity. The state received an “F” in Political Financing, Legislative Accountability and Ethics Enforcement Agencies, which was given a “0”.