For those of you that think you are great at solving riddles, I have one for you. How can you resist arrest when you have done nothing wrong to be arrested for? If that sounds paradoxical to you (and it should) just remember that the most common tactic abused by police officers and deputies all over the country is to use this tactic to arrest people that have done nothing wrong. It doesn’t matter even if they are not resisting, just saying those magical words out loud followed by some quick manhandling allows police to bully people on a daily basis. And once you do resist arrest (even though they had no reason to actually arrest you in the first place) you have then broken the law.  How is that for logic?

I just published my newest article on reasons I think we are now in a police state that I also hope you will consider reading because this is part of a much bigger national story.

The reason I am writing about this subject today is this story was on the news recently near where I live. The Bibb County Sheriff’s Office arrested a man after a confrontation outside The Crazy Bull in Macon. A deputy was working security outside the club, when investigators said 28-year-old Chad Hodges was told to leave Crazy Bull. In the grand scheme of things with police fatalities this case isn’t that bad, but I think it is a good teaching point for what is endemically wrong with police training all over the country.

The Bibb County sheriff’s office said Hodges refused to go away and started arguing with deputies. They used a stun gun on Hodges and took him to jail on charges of obstruction and disorderly conduct. Hodges told a local reporter after being told to either leave downtown Macon or get arrested, he wasn’t given a fair chance to leave.

That’s when he says he gave his phone to someone nearby, because he felt the situation could take a turn for the worst and he wanted it to be recorded. Not surprisingly Sheriff David Davis said deputies’ actions were justified, “When your looking at the video you don’t see the whole incident, you don’t see what transpired to make the management of the club ask this person to leave. You just see the part in which the deputies were encountering this individual and the actions they had to take based on that encounter. So an investigation if a formal complaint is lodged with the sheriffs department, we’ll certainly follow up on it”.

Now I am not saying this man deserved arrest or not since the video is admittedly of poor quality and may indeed leave off some important details. But here is what I found of interest. The man does not appear to be intoxicated. He is reluctant to leave because his wife is still inside the bar and is unaware her husband has been thrown out so that is what he is trying to explain as the reason for staying. Being kicked out of a bar is not a crime or an arrestable offense in an of itself. There is no mention that he physically assaulted anyone inside or committed any other crime. The officers are not giving him any clear instructions to follow. Several in fact are giving conflicting instructions and  shouting over themselves. Who should he listen to?

He has moved away from the bar property and has every right to be on a public sidewalk. The officer gets in his face and gives him an ultimatum to leave downtown which suggests until that point he had done nothing to warrant an arrest. He asked them what is he being arrested for and they replied obstruction which is circular logic and shows a poor understanding of the law by this deputy.

Watch the video and judge for yourself if you think a taser or an arrest was warranted. His only crime seems to have been not kissing their boots and having the audacity to ask any questions at all. They are harassing and shoving him and he challenged their authority and so they brought up the old standby which is “resisting arrest” as a reason for the actual arrest. Had the deputies simply remained calm and spoke to him in a normal tone this situation would likely have quickly been de-escalated. They are the ones that appeared to create this tension by shouting and getting in in his face and shoving him. Had they simply said, okay we will let you contact your wife inside and then when she comes out you both need to leave together things might have turned out very much differently.

When you look at some statistics you begin to see a pattern. According to these findings, just 15% of New York Police Department arresting officers generate over 50% of all “resisting arrest” charges, while an even smaller group of just 5% accounted for over 40% of those incidents. That statistics again: Just 5% of the entire NYPD (roughly 34,500 officers) were involved in over 40% of the city’s “resisting arrest” incidents.

Of course, the mere fact of reporting “resisting arrest” isn’t in itself suspicious, but when so few officers are reporting so many of the department’s cases, it’s probably a number worth investigating further, especially given what it could imply.

“There’s a widespread pattern in American policing where resisting arrest charges are used to sort of cover — and that phrase is used — the officer’s use of force,” University of Nebraska accountability consultant Sam Walker told WNYC. “Why did the officer use force? Well, the person was resisting arrest.”

One defense against cases like these is that the arrest itself was not “authorized.” This means the police did not have probable cause to arrest the person in the first place. If the police did not have probable cause to make an arrest, then the government cannot sustain a conviction for Resisting Arrest. That offers little consolation to people that have been traumatized by the police and thrown on the cement and manhandled, tasered, carried off to jail and then have the expenses of proving their innocence however.  Ideally police will learn to follow the law and stop using the is tactic to harass innocent people to begin with when calmer words are all that is needed.

In the video you can hear the deputy use another catch-all phrase when he says obstruction. Obstructing Governmental Administration or “OGA” for short. Another term is Obstruction of Justice.  People typically find themselves charged with Obstructing Governmental Administration in situations where they try to prevent a police officer from arresting another person. Clearly that deputy in need of a refresher course on what obstruction actually means. Obstruction can be a complex issue but I saw no evidence that this man was obstructing anything by asking if and why he was under arrest. He was answering questions and cooperating up until the point the deputy got in his face and tasered him a few seconds later. I see no evidence of obstruction.

Points to remember when you are speaking with police:

Stay calm and speak in normal conversational tones even if you encounter deputies like these that are clearly belligerent, yelling, and shoving you around. Try and calm the situation down and do not make sudden movements. Follow their instructions. You do have the right to ask if you are under arrest or being detained and you have the right to know why. If you are not under arrest you have the right to leave. Police can pat you for weapons but nothing more if you do not consent to a search. Don’t physically resist even if the police are not following the law themselves. Simply tell them you do not consent to a search.

You have the right to remain silent; use it. Tell the police nothing except your name, age and address. Don’t give explanations or stories or try to excuse your conduct.  You do not have to answer any questions, including your name, age, and address, or show any I.D. unless you are operating a car or are in a place where liquor is served. However, it is *advisable* to provide basic information such as name and address, but *nothing else*, if the police so request. Laws can vary slightly between states so check your own state to confirm any differences. The ones I listed are generally applicable to most states.

For bystanders watching or filming, do not interfere. Keep a safe distance and allow the police space to move. I would think a minimum of15 feet away is a good rule to follow. If you stand between the person they are speaking with and the police you can then be arrested for obstruction. You are allowed by law to video record the encounter. If you are detained, politely state that you believe you have the right to take pictures or video and that you do not consent to the officer looking through or deleting anything on your camera. Lock your phone before you give it to them if they ask for it and do not unlock it. But if the officer reaches for your camera or phone, do not resist. Simply repeat that you do not consent to any search or seizure. You don’t want to invite a charge for “resisting arrest.”

The key takeaway is police (the bad ones at least) use “resisting arrest” now as their free pass to arrest you even though you have done nothing wrong for them to arrest you.  Once you resist arrest (even an illegal or false arrest)  then you are doing something wrong, so just cooperate and file charges against the wrongful arrest later and also make sure and file an official complaint. Hopefully if enough of these bad cops using this illegal maneuver to arrest people wrongfully get enough complaints they can be weeded out of the force.

I hope Sheriff Davis will explain what OGA means to his deputies and will also explain the importance of only training officers to treat people with respect  (at least at first or until stronger words are called for) so that they receive respect in return. Something as simple as not yelling at people who have not yet committed a crime should be common sense but unfortunately it seems to be a rare commodity among police these days.

The photo below show the effects of the taser on his back. 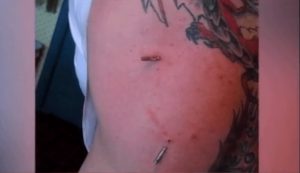 If you have thought of buying a dash cam for your car this might help you decide why that may be a very good idea.