Recently a reader of my site sent me a screenshot of a Facebook post made by the opinion editor of the Macon Telegraph. The reader was outraged that Charles Richardson had made this comment because he felt it was not only racist but was also presumably anti-gun. The reader contacted me no doubt due to some  of my past articles where I strongly condemned some of Mr. Richardson’s positions in support of disgraced former Bibb County superintendent Romain Dallemand. He probably assumed I would take his side and be equally outraged as well. But the reality is after the people brutally murdered in Charleston I can certainly understand why Charles Richardson wrote the following comment. I think we are all a bit more on edge these days and justifiably so. 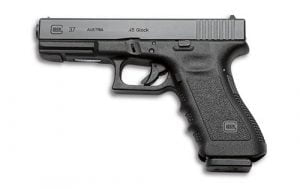 I have had two similar and equally unnerving experiences myself. One day while waiting to fill a prescription at a Kroger pharmacy a lady with what appeared to be a .45 caliber Glock got in line behind me. I know this gun well because I have the exact same Glock model 37. It’s a great gun and my only real complaint is the more expensive price of the .45 GAP ammo compared to .45 ACP. But it’s also a very big and heavy gun and one I wouldn’t consider carrying to Kroger. If I ever wear a gun in a place I feel is a bit dangerous and warrants me carrying, I always choose my Glock 27 which is a subcompact so can more easily be hidden but can still do the job if needed.

She had it strapped to her waist in a holster but also wore a belt with three extra clips that hold ten rounds each. The reason I became so nervous is when I turned around and saw her she had a very angry scowl on her face. Instead of smiling or simply having a normal expression she seemed to be saying  ” What the fuck are you looking at” with her eyes. We have all seen and recognize that facial expression from strangers in the past. Keep in mind I didn’t turn around and stare or gawk at her gun or give her any reason for that hateful look she gave me. This was just a very brief and casual glance we all do when someone walks up behind you in a line. 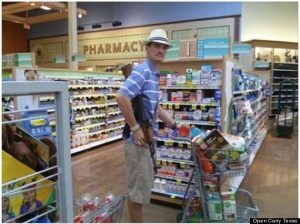 She then began mumbling and seemed terribly impatient. Even without knowing she had a gun this was the type of lady that would make anyone nervous because she seemed to have a hair-trigger temper and  slightly unbalanced. She kept mumbling under her breath things like “Hurry the hell up” and a few other comments I forget now. She seemed to be a very big hurry and didn’t like waiting her turn. That was not a very comfortable feeling to have someone who appears to be very agitated and is mumbling under their breath standing right behind you when you know they are armed and have additional clips also visible. How many attackers did she think she would need to shoot beyond the 1o rounds her magazine held? This was the type of lady my Mom would described as “touched in the head”.

I got the sense that the gun she was carrying gave her a sense of power and also that she appeared to be itching for an excuse to use it. I certainly didn’t want to give her any excuse and traded places in line with her and said I wasn’t in a hurry which was a lie. I actually was in a hurry as well and had an appointment I was running late for.  I much preferred her standing in front of me than behind me so at least I would’ve had a chance to react if she went psycho which I fully expected she would. She didn’t say thank you or even one word. She simply swapped spots with me without hesitation as if she deserved my spot all along. Her gun made her feel empowered and entitled to my spot in line and I guess immune to good manners as well.

I wish now I had taken a photo of her with that scowl and I dare any of you to tell me she wouldn’t have scared the bejesus out of all of you as well. (The lady in the picture below is not the one I described by the way.)

Another incident happened recently while taking my dog to Griffin’s Animal hospital in Macon,GA. (great vets there by the way and I highly recommend Dr. Griffin)  I was seated near the reception desk and a young guy that appeared no older than 21 at most walked in with his dog. This guy was short and extremely thin. I would estimate around 5′ 6″ and maybe 130 lbs with wet clothes on. He had acute acne and is the type of kid that was likely bullied in school. For a second I thought the weight of the gun would make him lose balance and fall to the floor as he approached the reception desk to sign in. It looked completely ridiculous for such a diminutive person and I was sure if he had to fire it his aim would be questionable from the power of the recoil. I certainly didn’t trust this “good guy” to hit an assailant and not me if one walked in to rob my veterinarian even though everyone pays with credit card or by check that I saw in my hours by the desk while waiting on many visits there. You could tell the gun gave him a courage that he lacked without it and he walked with an unnatural gait of someone far more intimidating than his size or clothing warranted. It made me think of the Australian frilled lizard that puffs up as it’s only defense. His unnatural stride almost looked comical as this physical weakling tried to take unnatuturally long and wide steps to undoubtedly increase his intimidation factor that his gun alone didn’t and would never provide. I thought to myself that some therapy and weight lighting would be a more efficacious remedy to his low self-esteem than his Smith & Wesson ever could provide. I am sure he felt like Clint Eastwood but still looked like Barney Fife to the rest of the world. He was the frilled lizard personified.

He wore skinny jeans, boots, a baseball hat on backwards, poindexter eyeglasses, and a camouflage shirt which appeared to be somewhere between hipster and cowboy in fashion. I mention hipster because he was attempting to grow a goatee but it was mostly baby fuzz and the skinny jeans just looked so very wrong on him. But he was also armed with an overly large handgun clearly visible in a holster that his small stature and skinny arms would have a hard time using if the need ever arose. I can’t imagine he was able to even pour from a gallon of milk without using both arms and not spilling some. That is how weak this guy appeared to me.

Like the woman at Kroger his choice of gun seemed unreasonably large for his small frame. You would think a sub-compact pistol would be better to wear around your waist all day and not some Smith & Wesson with a  5″ or possibly 6″ barrel  revolver. At least that is what it appeared to be but I didn’t get a great look and certainly didn’t want him to see me staring at it.

He didn’t mumble like the crazy lady at Kroger, but it still made me extremely uncomfortable. I was there with a sick dog and was already on edge about that and a cowboy hipster that looked a lot like the Charleston shooter made me very nervous for the 30 more minutes I waited to be seen. Would this kid think I reminded him of the guys that beat him up at school and take his anger out on me?

Both he and the woman were white if that matters. Had they been any other race I would have felt that same uneasiness. This had nothing to do with race and everything to do with not knowing if at any moment my life could end. When you see a stranger armed in public you simply do not know if they are potentially dangerous or not. 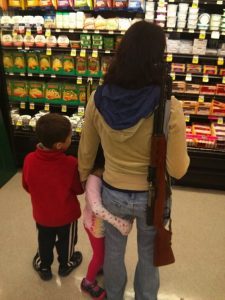 Whenever you talk about guns it nearly always degenerates into epithets and shouting and nothing good ever comes of it. This article has nothing to do with your position or views on the 2nd Amendment at all. This article is about common sense and realizing just because you can carry a gun at the airport or Kroger or the vet doesn’t mean it’s a good idea to do so.

If you choose to carry a gun in public you need to understand that when people smile at you they are probably just trying to gauge whether you are a maniac about to kill them or not. It is not a genuine smile but one of fear and discomfort. Strangers have no way of knowing is you are so called “good guy” or some lunatic about to kill as many people as they possibly can.

Do you really need to bring long gun rifles into a Kroger to buy sandwich meats? Is it really all that hard to keep your handgun less visible? Maybe cover it up with your shirt or jacket when possible? Instead of these humongous 5″ and 6″ barrels and rifles can you at least consider a compact or sub-compact handgun that can still pack a punch but are more easily hidden? At least then you can still feel safe and not make other people feel unsafe.

One commenter in the thread on the Richardson Facebook post above summed up my sentiments as well.

It makes me nervous sometimes too, Charles. I struggle with the gun debate because while I support the 2nd Ammendment in spirit, I don’t like this old west stuff that’s going on now. I can’t tell the good guys from the bad guys. I’m watching your every move because I don’t know you.

So while I support the 2nd Amendment that doesn’t mean I know if a person carrying one in public is a threat or not. Please try and use some common sense if you choose to carry and keep that in mind. Although I have had my differences in the past with Charles Richardson on education, on this topic in light of both the Charleston massacre and my own experiences I understand and share his trepidation. I will give him the benefit of the doubt that had that person been black or any other race he would have felt equally ill at ease and it was the gun more than the race of the person that made him feel that way.

What surprises me more than anything about the comment Charles Richardson wrote is his missed opportunity to turn that experience into a real dialogue in his editorial section and give us a break from his usual milquetoast repertoire where he usually writes about parenting and other safe and mundane topics.