It is truly surprising to me that so close to the election so few Georgia voters know much about the candidates. Not a one of my otherwise politically savvy friends had heard the name Copart for example. Nor can any of them name one single thing Deal has actually done while governor. Nathan Deal was close to flat broke a few years back but now he suddenly became a millionaire and also gets a nice fat $10,000 check from a company that owes Georgia taxes to the tune of $74 million or more. In fact they owed this money BEFORE they bought Deal’s failed salvage business. Funny coincidence don’t you think about paying a broke governor millions then agreeing to pay him an additional $10,000 monthly rent while owing the very same Governor’s state $74 million in taxes.

There is also another story from Daily Kos concerning some lucrative arrangements with a political action group. The report says that Georgia Gov. Nathan Deal (R)’s family and business partner have been receiving payments from a secret Political Action Committee called Real PAC. Half a million dollars of the money donated to the PAC has come from corporate health care interests which — like the governor and Georgia state Insurance Commissioner Ralph Hudgens — oppose the implementation of the Affordable Care Act (ACA), also known as “Obamacare.”

According to investigative reporter Jim Walls of Atlanta Unfiltered, the PAC hasn’t filed taxes or the required financial disclosures in two years, and the information it did file for 2011 was incorrect. Contributors to Real PAC include Aetna, Humana, Blue Cross, United Health care and other interests that want to keep health insurance premiums and other costs as high as possible.

You don’t get a nickname like Shady Deal for nothing. Nathan Deal has a long and storied history of very questionable behavior that dates back long before he became governor. Here are just a few links that list some of the numerous ethically ambiguous deals made by Nathaniel “Raw” Deal over the years.

It almost boggles the mind how he has managed to avoid the fate of his pal Bob McDonnell of Virginia. But quite honestly I don’t think Deal’s luck will last much longer. The FBI is reportedly investigating all of these charges, but due to the sheer complexity, magnitude, and audacity I imagine it is taking them quite a while to build their case. You don’t indict a sitting governor unless you are absolutely sure all your T’s are crossed and all the i’s are dotted. But if even a few of them turn out to be true, Nathan Deal would likely be a far bigger Deal (pardon the pun) than Bob McDonnell.

His personal income has grown from $76,474 the year before he became governor to nearly $1.9 million while in office but he earns a base salary of only  $139,339 as governor. Since no good #ScanDeal is complete without some titillating  sexual angle Nathan has obliged. It seems the property Deal sold went to a California Sex store operator of adult videos and “novelties”. Though this is not to be confused with his failed salvage business that was sold to Copart. The real estate sold to the adult video operator was his daughters failed sporting goods  business a few years back. It seems Nathan’s good business sense runs in the family. He bails his daughter out and the taxpayers bail Nathan Deal out to the tune of $3 Million in fines from ethics lawsuits.

Why Copart Could Be the Final Straw 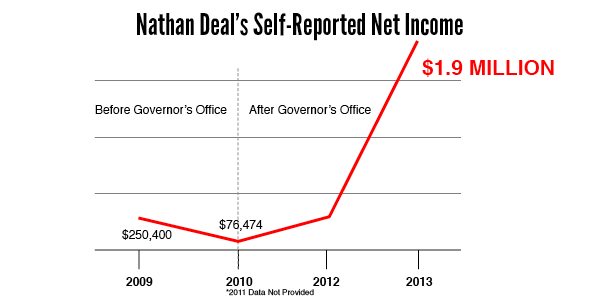 Better Georgia has done an excellent job of piecing together all the sordid pieces to this puzzle which I have included below. Suffice it to say that you will likely hear the name Copart far more in the news before this plays out.

Thanks to the Gainesville Times, we know today that the company that recently bought Gov. Deal’s auto salvage business in Gainesville owes the state of Georgia $74 million in back taxes and penalties.

Nathan Deal had a political problem when he walked into the governor’s office because of ballooning personal debt and lingering ethical concerns over his auto salvage business. Today we know the company that recently solved one of Gov. Deal’s biggest political and financial problems has it’s own $74 million problem with unpaid taxes and penalties owed to the state.

Before running for governor, Deal faced allegations he violated ethics rules in Congress by lobbying Georgia officials to favor and protect his auto salvage business at 1602 Athens Highway. Less than two months after the allegations were filed, Congressman Deal ended his $300,000 per year business agreement with the state.

After winning election, Deal faced ballooning debt. He gave a trustee “unilateral authority over his homes, his investments, [and] his half-interest in an automobile-salvage company,” according to the Atlanta Journal-Constitution. At the time, the newspaper reported that Deal gave up “an unprecedented level of control over his assets and debts before he takes office.”

Fast forward to May 14, 2013. Gov. Deal’s “blind trust” sold the political albatross to one of the state’s largest debtors, a Texas-based company that owes nearly $74 million in back taxes and penalties.

Gov. Deal and his business partner made $4 million up front on the sale, plus they still own the land and get $240,000 per year in lease payments, or another $2.4 million. (At the end of 10 years, Copart Inc. can buy the land for just north of $4 million).

On July 3, seven weeks after the business deal became final, the public finds out about the transaction. The AJC reported that Gov. Deal personally “signed off” on the sale, even though the business was operated by a trust that was reported to have “unilateral authority” over the business.