One of my favorite T.V. shows is Modern family on ABC. The writing is very clever and the continuous yet humorous misunderstandings never seem to get old. Although Modern family has flirted with Apple product placements before (The Phil iPad episode) they have never incorporated Apple into the show to this degree before.

This was a true product integration episode that was just as funny as all other episodes but could have just as easily been a 30 minute Apple commercial.But not once did I ever feel like this was an intentional product placement because it felt so natural. After the episode I learned that although Apple gave their permission they did not pay any money or have any influence at all which explains why it probably felt so natural.

“Connection Lost” is the name of the episode. Shot completely with MacBook Pros, iPhone 6s and iPads, the episode finds Claire sitting in the Chicago airport terminal waiting to board a flight to return home. Claire it seems is quite the multi-tasking Mac Mama and quickly and expertly manages to switch between numerous applications while also using FaceTime to chat with the rest of her family. 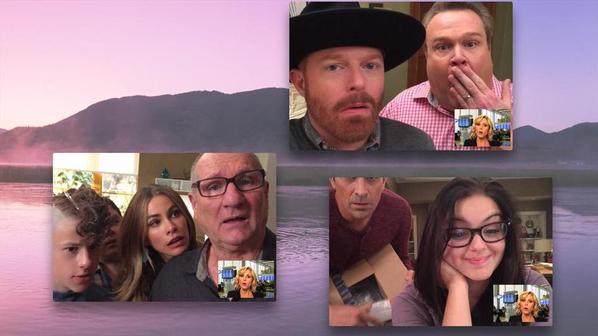 She gets a reminder on Facebook that today is Mitch’s birthday and then calls him up to wish him Happy Birthday while simultaneously buying him a shirt with Next Day delivery. The gist of the episode is that Claire becomes a sleuth and starts to figure out that Haley has eloped with Andy to Las Vegas to get married because she thinks she is pregnant. Of course Haley was asleep at home the whole time.

When the episode first started I was a little skeptical if they could pull it off. But even though they used FaceTime the entire episode it was seamless and really connect with me because I use all those products and applications daily.

I am a devoted Apple user and some would even say it is like I am in a cult. But I assure you I am loyal for a reason.  I have never bought or owned a Windows computer in my life. From the 9th grade I have owned nothing but Apple computers and make no apologies for it. In fact that is the reason I chose the name of this website.  The Mac part of this website’s domain name was due to the fact that many years ago I had an idea for an Apple related website but never had the time to see it through. I could never bring myself around to selling the domain though and finally had an idea for it when I wanted to start this blog and just got creative with adapting the initials. 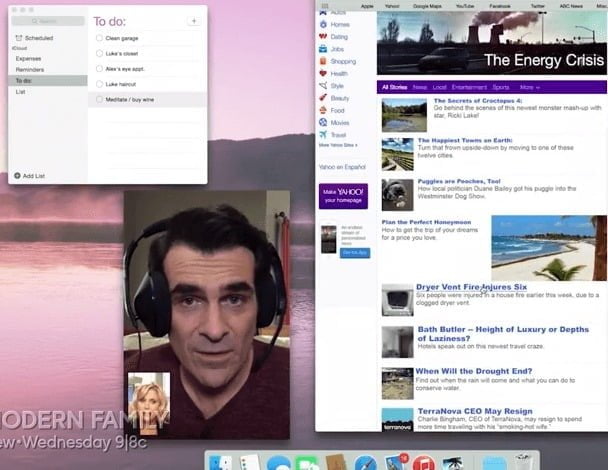 Modern Family may not have intentionally tried to make any sort of social statement, but I think this episode was a reflection of what actual modern families are like in this connected and digital world.

Even as kids and parents are glued to their iPhone and iPads it is still possible to connect with each other digitally. It also shows that even when thousands of miles apart video chats can act as a very good substitute for being there.

The writers managed to hit a lot of Apple selling points: ease of use, speed, gorgeous design, fun, functionality- they hit them all. I daresay Microsoft and Google executives cringed when they watched this episode but neither of those companies offer all the native products to be able to have made this episode on their platforms. This was only possible with Apple products and applications.

In this short episode Claire managed to take care of her To-Do list and  bring up childhood memories of her daughter with a movie she made with iMovie. FaceTime, Messaging, Safari, iTunes, Reminders, iPhoto and even the iCloud all make appearances at one time or another, but non-Apple apps like Facebook, Instagram, Yahoo, and Google also got a tiny bit of screen time.

Apple didn’t pay a dime and weren’t involved at all. The idea came from one of the co-creators Steve Levitan. Apparently the episode was based off of his real life while using FaceTime with his own daughter and family.

This was a very entertaining and well-done episode and I love the fact that so many Windows and Android trolls probably had a near heart attack watching. They are likely busily spreading some of their abundant iHate in forums where these types congregate on forums. It also helped to explain in a seamless and unintentionally casual way why people  buy Apple products. It also showed why very few ever buy anything else. Apple has extremely high customer loyalty with good reason. Build a great product and they will come to the tune of $700 billion it seems.

Tonights episode’s takeaway is that the real modern family isn’t limited to just ones that consist of two Dads or an older Dad and younger wife, but also one where technology is now a nearly indispensable component of any family life no matter who your family consists of. Well done Mr. Levitan.  You really produced a spectacularly funny and entertaining episode tonight and I expect we will see a lot of copycats very soon.