This video and the story itself have gone viral but the exasperatingly poor media coverage makes it hard to know what really happened. When I first saw this video and read about the events, I was just as outraged as most of you. But a lot of new details are starting to come out now which suggest there is a lot more to the story.

Apparently we didn’t see the 23 minutes before the famous video where around 70 to 100 teens stormed this private pool because 19-year Tatiana had advertised a free pool party event on social media. Racism is real. Police abuse and Police brutality are real. But if this story turns out to be a mob of violent teens that shouldn’t have been there in the first place and instigated violence, then people with legitimate cases of police abuse and racism are going to have a far tougher time being heard now.

I still think the one cop at the center of the outrage was wrong and overreacted. Cpl. Eric Casebolt, was recorded pinning the girl to the ground and handcuffing her. At one point, Casebolt could be seen pulling the girl’s hair and pushing her face toward the ground. He also appeared to draw his gun and point it toward several teens in the area.I don’t think any extenuating circumstances can condone this behavior. He was placed on administrative leave pending the outcome of an investigation and rightfully so in my opinion. But I also think we need to spread a wider net when casting blame based on some new information and slow down with all the righteous indignation. Too much is at stake to jump to conclusions quite so fast. When you choose a poster child for police abuse you better make damn sure it doesn’t backfire once more information is released.

Here is the video which brought national attention to this story. 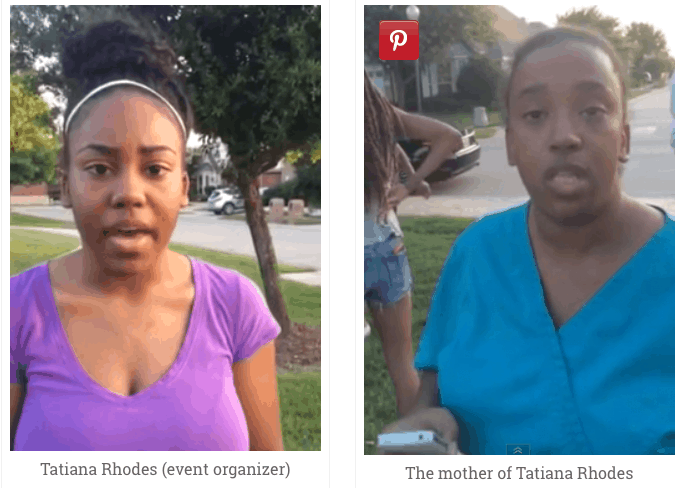 Apparently the woman who organized the event in McKinney, Texas is named Tatiana Rhodes (or Tatyana Rhodes) and is 19 years old. Her mother and a sister also assisted her with the preparations. She has begun deleting all her social media accounts or making them private which is understandable given the national attention she has received. For around a month she had been promoting this party on Facebook and Twitter with the hashtag name “Dime Piece Cookout” 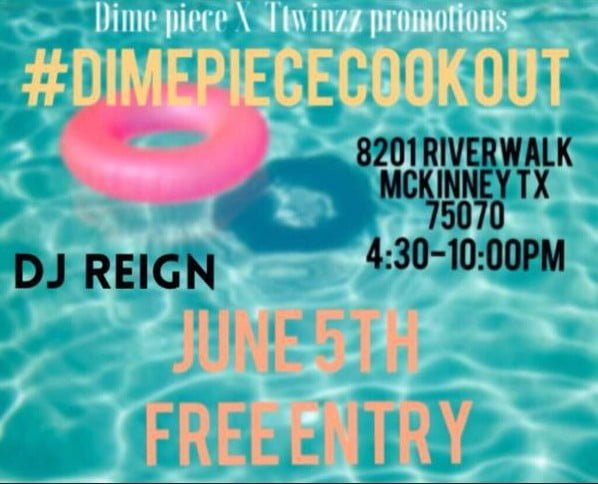 June 5th pool party flyer. No mention of membership cards, being a neighborhood resident, or being a classmate as a requirement to attend.

This party took place in a subdivision at a pool managed by a Homeowners Association. The neighbors in the community pay for the pool and agree to abide by some very strict rules to use the pool. In order to access or use this pool you need to have a neighborhood card that has a magnetic strip to scan for entry and the pool is protected by a large fence to prevent trespassers . The fence is there to only allow neighbors who are paying for the pool and also likely due to concerns over liability in case someone slips in after hours and drowns. They allow a member to bring in two guests.

This McKinney, Texas subdivision called Craig Ranch North also publishes a magazine with information on events and reminders about the rules for the pool use and other information. In a recent article  they specifically reiterated pool rules, card access, and entry and also an explanation of reserving it for special events. 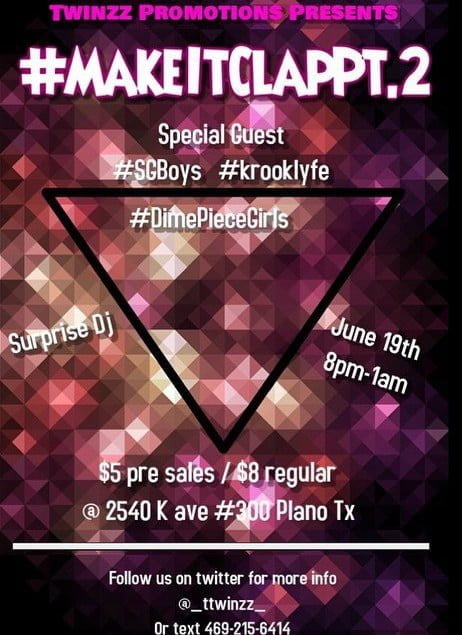 20-year Tatiana Rhodes didn’t seek permission to use the pool that day for a large event. She also hired a DJ and advertised the party to include free pool entry for anyone that came. Apparently this is not the first event Tatiana has organized and she has done many in the past. She normally charges for her events but this  June 5th pool party was promoted as a free event to promote a future paid event on June 19.  She runs her business under the name Twinzzpromotions.

Andrew Cosby is the DJ that she hired and he had also tweeted out before and during the Craig Ranch event that it was a pool party. He goes by the name DJReign and like Tatiana is also doing his best to erase or make all his social media accounts private.

Apparently Tatiana is a better promoter than she realized because a lot more people than she expected showed up. Carload after carload of mostly teens started being dropped off in cars. Some reports by witnesses said it was  around 70 to as many as 100 people and they began to jump the fence to the pool area.

Two security guards at the pool tried to stop the fence jumping and things spiraled out of control fast. There are reports kids were drinking alcohol, smoking weed, and being hostile and aggressive with each other and also  with local residents and the security guards.

It was at this point that an adult resident of the neighborhood asked them to leave the pool area. A young 14-year old named Gracie Stone who is friends with event organizer Tatiana and her brother became angry at the suggestion they had to leave. Tatiana Rhodes can be seen pulling the hair of that woman below. Gracie described the woman as a “trashy white lady came up and man handled me and got up in my face and yelling at me and Tatiana stood up for me.”

That fight resulted in numerous calls asking the police to intervene as it was now spiraling further out of control. As soon as an officer arrived he called for backup and nine more officers soon arrived on the scene. Most of the officers seemed to be much calmer than the one seen doing the acrobatic leap and stunt man fall. In the video above you can see and hear some police officers trying to calm things down.

After all the fracas with the police from the video that went viral and some semblance of order had been restored, Tatiana Rhodes made this video.

In the video she claims most of the teens were residents of the neighborhood or classmates which should be easy enough to prove. If most of them had the pool access card and had the right to be there then that is completely different story. But then why had she been promoting it on social media with flyers that made no mention of requiring a pool access card or to be a classmate at her school?

The white lady in the hair-pulling fight video is also no innocent victim if the reports that she suggested an immediate “return” to federally subsidized Section 8 housing and other racially charged comments as reported by a few of the teens.

I am not trying to argue that these the actions of the policeman at the center of this controversy were justified. I am also not arguing that some racist comments weren’t made by some of the people from both sides of this brawl. But what I am saying is the media have done a piss-poor job of giving us all the facts which would allow us to at least form an educated opinion based on what really happened.  Can we at the very least just get all the facts before people take sides? By leaving out so much of the back story and details you can’t help but think this was intentionally done to support a narrative. But of course the real reason is click bait sells ads and papers which is likely why most media aren’t bothering to give a better accounting of the events. If you knew the whole story you might not click their websites or buy their newspapers.

The rules only allow 2 guest passes per resident and Tatiana Rhodes far exceeded that this day. Additionally she hadn’t reserved the pool for any sort of event where 70 or more people who are not members of the homeowners association showed up.

The Washington Post has done some fantastic reporting on a range of issues, but their coverage of this was appallingly bad and lacking detail. Most people don’t expect much from CNN so their coverage which is even worse is not so surprising.

I think mistakes were made by many sides this day. I think the cop in the video certainly overreacted. But I also saw other cops in videos acting calmer and simply trying to deescalate the situation. I have no idea what racial epithets were thrown around that day which may have precipitated the hair pulling fight and I certainly don’t condone that. The residents who felt threatened probably should have left the pool area and called the police instead of staying and confronting them directly as well. Mistakes were made all around by a lot of people besides only the cop.

Tatiana Rhodes also should learn a valuable lesson that on a hot Texas day when you advertise a free pool party on social media you never know how many people will show up. In the future she might want to do some more careful planning complete with a limited number of tickets and ask permission of the property owner before she chooses a location and consider age limits or some sort of security to control fights.

As I said at the beginning of this article, police abuse happens and racism is real. But contrived and fictionalized accountings that leave out significant details simply for the purpose of promoting an agenda will cause far more harm than good once all the facts come out which paints a completely different version.

The short attention span of Americans and the desire of media to sell ads and papers is the real story here. Lost is any deep analysis of the underlying problems or ways to address and prevent them from happening in the future. Police reform, race relations, racism, education reform, criminal justice reform, community policing, poverty and so many other issues which are the underlying issues at the heart of so many of these viral videos that are just as quickly forgotten when the next story happens.

But alas, the deeper issues don’t sell papers because they are too complicated, so instead they are simply ignored or barely mentioned at all. Only stories that can be neatly packaged and wrapped up to support a widely held narrative or bias in a 24-hour news feeding frenzy are the ones that ever get told.

Below are a few accounts by people with some very different versions of what has been reported widely in the media.  Hopefully someone in the media will step up to the plate and give us a full accounting with only the facts. But since it has already gone viral I fear the lines in the sand have already been drawn and many people have already made up their minds which is the real tragedy. Instead the pundits from both sides have their red meat and in a few days they will get hungry again and move on to the next viral video and we will have learned nothing at all. Rinse and repeat and let the outrage begin all over again while nothing gets done to make things any better. 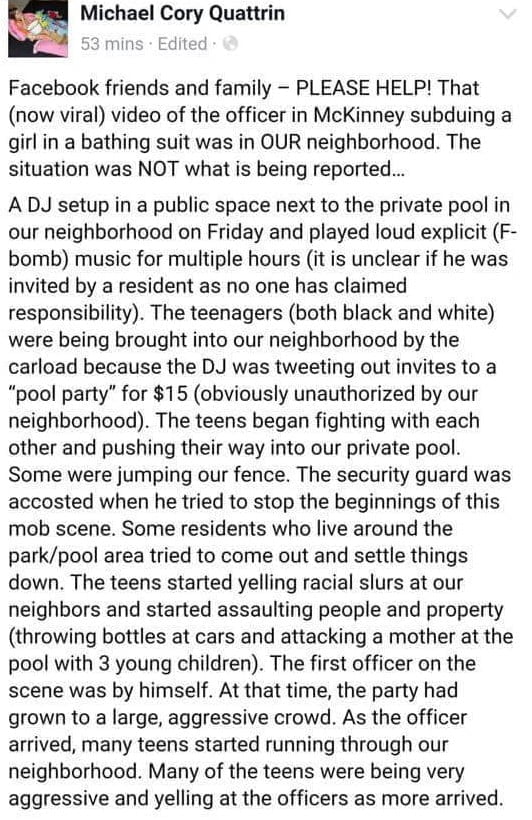 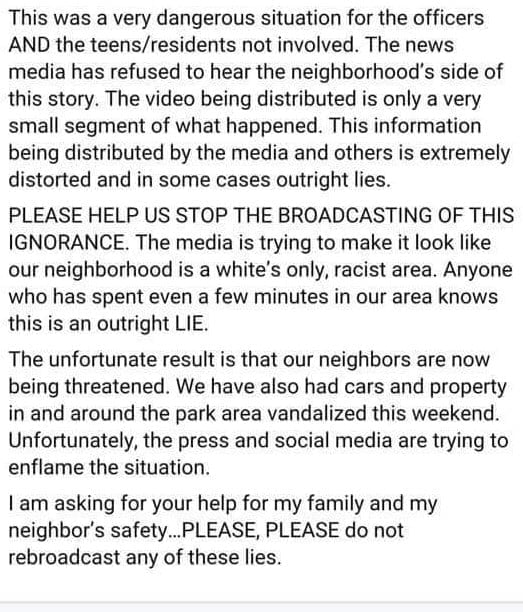 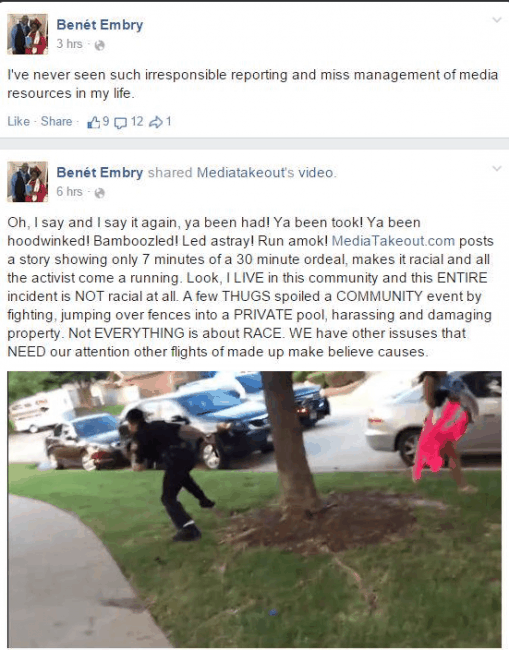 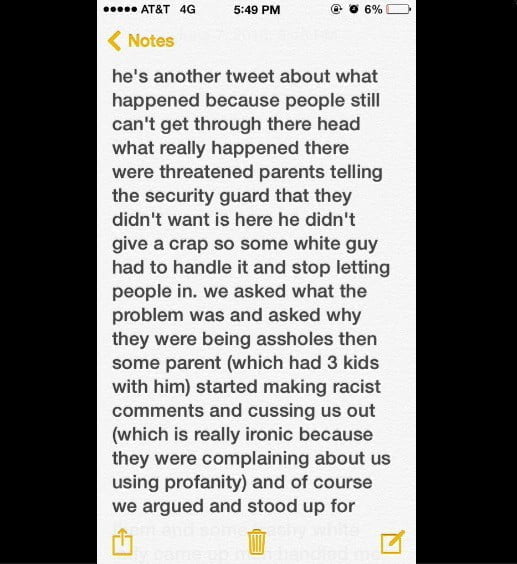 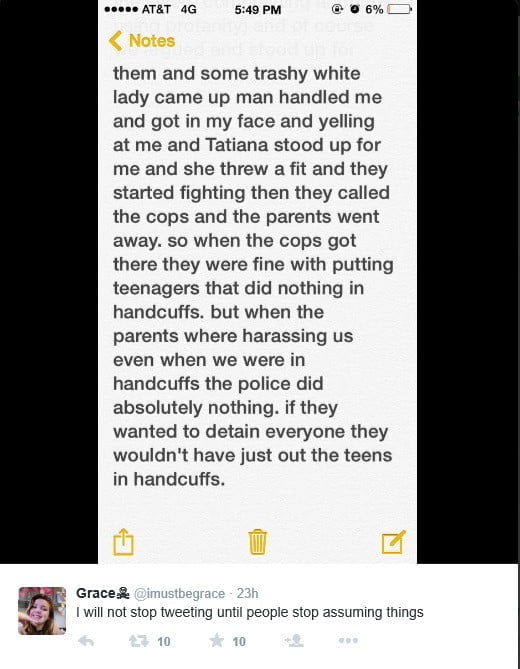