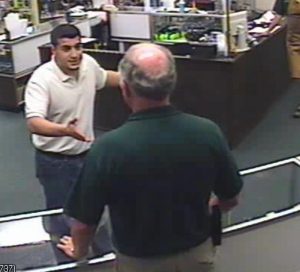 Update: Exactly one day after this article was published Kinnan Ghali was arrested for the incident described below after he turned himself in. He was bonded out of jail soon after at 5:34 P.M. He’s now charged with four counts of making terroristic threats.

On June 27, 2014 at around 3:15 PM Kinnan Ghali entered Eagle Gun range and allegedly made some terroristic threats according to several eyewitnesses I spoke with. The argument began over a warranty dispute that quickly escalated. The witnesses told me he used the phases “I’m going to come back and kill everyone. I’m going to blow this place up. I’m going to shoot the place and everyone inside up. Things of that nature.” They called the Bibb County Sheriff’s department and filed a complainant but no arrest have been made to date.

I first learned of this incident from a comment under this article. He left a comment on April 18 and wrote: “Kinnan Ghali, a year ago he had threatened everyone at the shooting range off of thomaston rd, they had refuse to sell him a gun , he threaten to kill everyone inside and the sheriffs were called , got there after he left, wrote a report, but nothing ever followed up after that incident either, nothing heard back from the department, terrorist threats and nothing again. i guess money does talk .” 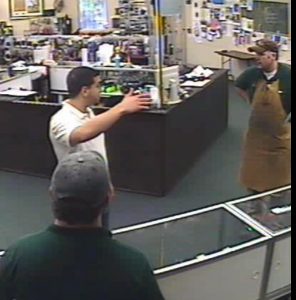 I followed up with the commenter and he gave me a more detailed accounting of the incident he witnessed. I then went in person to corroborate this story and asked the store owner and an employee directly about this incident. They were extremely forthcoming and had a vivd memory of June 27, 2014. Both men I interviewed for this article told me you don’t soon forget when someone makes death threats against you. They both remember it like it was yesterday.

They recounted the events of that day to the best of their memory. They also had written a description written on the day of the event while it was still fresh in their minds. The owner also gave me a letter he had written to Sheriff Davis dated April 16, 2015 enquiring about the status of the case. The letter is included at the end of this article. I was also allowed to view the video surveillance footage of the encounter. The video does not contain sound but with all the gesticulations and animated facial expressions you can clearly interpret from the video that Kinnan Ghali is not a happy customer. 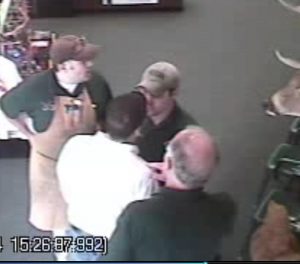 After listening to the owner and employee of Eagle Gun Range it seems the argument began over a misunderstanding involving warranties of Glock handguns. A few days prior Kinnan had visited Eagle Gun Range along with another gentleman. At that time they rented a gun to fire at the range. Kinnan Ghali filled out a form with his name and address and this is the same man pictured in the video.

A few days later he retuned in the morning and asked about purchasing a Glock handgun. The person he spoke with explained to him that Glock offer a one year warranty but if he bought it at Eagle Gun Range they offer a lifetime warranty. They do this because they have a good relationship with Glock as a dealer and it is easy for them to get them repaired. It’s a great incentive for customers to buy from them with the peace of mind that comes from a lifetime warranty. Glocks also rarely break or fail so there are few incidents where a warranty is ever used. Kinnan Ghali did not buy a gun that morning.

Later that same day in the afternoon Kinnan showed up again, but this time he was very upset and agitated and immediately became aggressive and confrontational. Apparently he had checked the Glock website or called them and saw they only offered a one year warranty and thought the offer of a lifetime warranty was a lie or a ruse. He berated and yelled at an employee for several minutes. He called him a liar and many other profanities. He then did the same thing to the owner after he took over discussions with Kinnan. 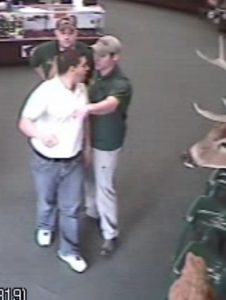 They finally had had enough of being screamed and cursed at and asked him to leave their store which was their right. They made sure not to make any physical contact with him because they didn’t want this to escalate even further and didn’t know how he would react.

They escorted him towards the door and tried to usher him out. They told me he was in no hurry to leave the store and this process took a while. On the way to the door he continued cursing and yelling and got in their faces as you can see from the photos. He appeared to be extremely aggressive by this point on the video and was in their faces almost daring them to make physical contact. To their credit they remained calm, kept their composure and didn’t take the bait.

The Eagle Gun Range witnesses told me it was at this point while exiting Kinnan stepped up his verbal assault and allegedly used phrases and threats that he was going to “kill everyone inside, blow the place up, they didn’t know who they were messing with, and this wasn’t over. “ I watched the video but it didn’t include audio only video. Numerous witnesses at the scene all heard these loud threats.

I asked once again at the end of my interview how confident they were that this was Kinnan Ghali and not his brother or someone else entirely since they look similar with short hair. They responded that Kinnan Ghali had filled out a form to shoot at the range two days earlier with a chubby guy. On that form he used the name Kinnan Ghali along with his address so there was no mistake as to his identity since he also produced a driver’s license. He had also mentioned he was a Mercer Law School student. This was Kinnan.

Only two days later he came back to presumably ask about buying a Glock in the morning and then returned later that same day and started screaming at store employees over a warranty and they clearly remembered him from two days prior. Most people would be very happy to learn it came with a lifetime warranty which makes this whole episode even more bizarre. Who gets angry when told they will get a lifetime warranty? 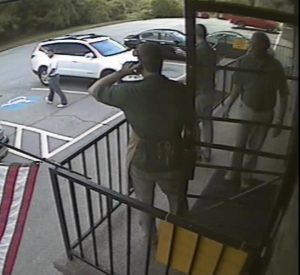 I also previously reported about a case with Kinnan at a boxing gym. In that case on June 7, 2013 Kinnan Ghali was charged with Disorderly Conduct in connection with a fight that took place at the amateur boxing gym on Sixth Street. According to the report, Mr. Ghali and another individual became involved in a physical altercation that resulted in minor injuries to both men. The responding Macon Police officer (This was prior to consolidation) issued citations to both individuals for Disorderly Conduct. I also included some reports in that same article by Mercer students who told me about a few hostile exchanges at the law school.

This case at Eagle Gun Range is also strikingly similar to another report involving his brother Basil Ghali at an MMA gym with threats allegedly made to “kill everyone and blow the place up” according to comments from an eyewitness. The police were also called to the MMA gym where Basil Ghali was arrested for terroristic threats after he returned shortly after making death threats. Basil was also arrested in Detroit for possession of an assault rifle in conjunction with marijuana in 2012.

Neither Kinnan Ghali nor Basil Ghali have been prosecuted for the cases at the MMA gym or the boxing gym to date though they were each arrested. Kinnan hasn’t been arrested or even charged over the events described in this article.

I reached out to the the Bibb Sheriff’s office about this case at Eagle Gun Range. Sheriff Davis responded to my inquiry with the following response.

“Mr. Ghali became upset about some points of the store’s warranty and repair policy. The report was not specific about what policies upset Mr. Ghali.

Eventually the store manager asked Ghali to leave the store. According to the store manager, as he was leaving, Ghali stated that if the manager came outside he “would kill him”. Deputies and Investigators made a couple of attempts to reach Mr. Ghali at his residence, but were unsuccessful. Investigator Stoke noted that the victims did not want to prosecute in this incident. There has been no further action on the case.”

The owner of Eagle Gun Range told me he still hopes something will be done about this case. After information came out involving the Tobesofkee shooting he recognized the name Ghali. He immediately recalled it was Kinnan Ghali that had visited his store in June of 2014 and wrote a letter asking about the status of his case.

The owner never indicated to me that he had dropped the charges or was aware this case had been closed to any further action. When I asked him if he had dropped the charges he said that he hadn’t. I can only assume there was a misunderstanding or miscommunication between the owner and the investigator on this case since I do not believe the owner of Eagle Gun Range had any intention of dropping the charges as evidenced by his letter. His prime motivation in speaking with me was to make sure this incident isn’t overlooked or forgotten and Kinnan Ghali is eventually arrested for terroristic threats.

Here is a copy of the letter recently sent to the Bibb County Sheriff’s office in April enquiring about an update on this incident from June of last year. You can see he is still operating under the assumption the investigation is ongoing. The letter would make no sense had he communicated that didn’t want to press charges to an investigator.