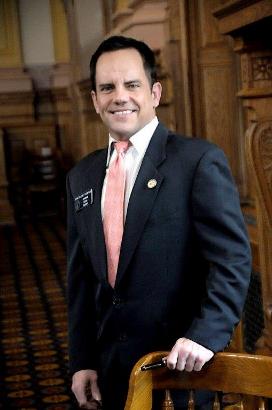 ATLANTA — The house of State Sen. Curt Thompson (D-Tucker) caught on fire Monday afternoon, February 23, 2015, destroying all his belonging and his beloved pets.

Curt Thompson is well known for his two senate bills knows as SB-6 and SB-7 which are in favor of medical marijuana in Georgia and are more open than the much more restrictive House bill that passed earlier today.

Thompson’s St. Bernard Stein; his three cats Rosie, Nieves, and Ms. Kitty; and Mufalda the bird, plus the fish all died in the fire.  Only one dog, ChaChi, survived.

Neighbors reported the fire and by the time Thompson got home from the State Capitol, everything was lost.

According to the Gwinnett Daily Post, the fire department believes the fire started in the basement near the heater.

On his Facebook he thanked his neighbors, friends and Senate colleagues who offered help during this time of lost.

“I lost my home today in a house fire.  I lost everything in the way of personal belongings I own but I’m safe,” Thompson said on his Facebook page.

Sen. Thompson was first elected to the Georgia State Senate in 2004.  He is a member of the Appropriations, Ethics, Judiciary, and Natural Resources and the Environment committees; and Chairman of the Special Judiciary Committee.

He is a life-long resident of Gwinnett County and has a law practice in Norcross.  He worships at Chattahoochee Friends Meeting in Norcross and All Saints Episcopal Church in Atlanta.  He is active with several organizations and civic groups.

A Go Fund Me page has been set up to help Sen. Thompson during his time of tragedy.  Thompson told the Gwinnett Daily Post that he is unsure, due to ethics rules, whether he will be able to accept the funds.