I collected a list of statistics on where Georgia ranks in a lot of important categories but since it was hidden at the bottom of another article, I thought it might be hard to find. I decided to give all these statistics their own article because more voters in Georgia need to know things are far from peachy here in the peach state.

Georgia is hurting badly and four more years of Nathan Deal will ensure we continue to drop in categories that actually matter to everyday people looking for work, trying to buy groceries, and simply trying to survive.

Georgia ranks 50th in the country as far as corruption in a state integrity report card.

Georgia ranking #1 in Business ranking was bought and paid for by a $44 Million tax break to Caterpillar. They turned around and formed a group that then named Georgia #1 for business which is the least they could do for that $44 million gift from Nathan Deal.

Georgia has three cities among the 10 fastest shrinking cities in the U.S. Georgia is the only state with more than one city on that list. Valdosta, Albany and Macon are all on the Bloomberg Rankings. 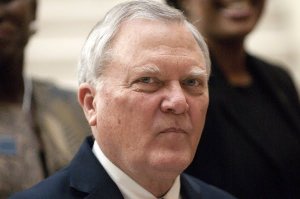 Georgia’s per capita income has dropped to 40th in the country and only one other state can claim that in the entire country.

Georgia is 32nd in both CNBC’squality-of-life and education categories.

Georgia has the 6th highest unemployment rate in the country

Nathan Deal Voted among worst Governors and also in 2009 worstcongressman in the country.

The FBI has an ongoing investigation into Nathan Deal. Is he the nextMcDonnel?

The next time someone that supports Deal brings up that #1 in business claptrap be sure and send them to this page and ask them their thoughts on the rankings that matter to Georgians who aren’t CEO’s.

Be sure to read my exposé entitled Are Georgian’s getting a Raw Deal? for more details on just how ethically challenged our current bulldog in chief of the state appears to be. Am I the only one that thinks with a mug like that he is better suited as the next UGA mascot instead of governor?