From the AJC’s Aaron Gould Sheinin:

The House plan would allow existing local special option sales taxes, or SPLOSTs, to continue until they expire. After that, however, local governments would be allowed to levy an additional 3 cents per gallon excise tax, but all of that revenue would have to go to transportation.

Motor fuel would be exempt from any future SPLOST, which would limit the tax’s revenue base, which in fiscal 2014 equaled $172 million for school boards and $516 million for all local governments. 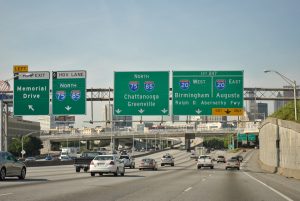 So will Nathan Deal’s $1 Billion state transportation plan affect you? Well, when for all intents and purposes they are stealing funds that local governments relied on for their own road repairs, schools, and many other projects…YES  it means the impact will be profound at the local level and your property and possibly other taxes will have to be raised. You can’t steal from Peter to pay Paul without Peter going hungry. Unless you want Peter to starve you are going to have to figure out a way for him to buy food by paying him and that means the money will need to be recouped at the local level.

This sleight of hand is a cowardly way Nathan Deal and the politicians in Atlanta want to make the local guys take all the heat from voters while they appear to have clean hands. In other words they realize once they appropriate local fuel tax funds and send it to the Gold Dome in Atlanta, local politicians will have no choice but to raise taxes. Simply making budget cuts won’t come close to filling this shortfall. Instead of choosing to actually work on a real transportation bill, they chose to take the cowardly route of simply stealing from the little guys who don’t get a say in the matter.

The Butts County administrator summed it all up nicely in a letter as he begs the people of Butts county to call the leadership to express their opposition. Good luck with that. 🙄 Nathan Deal and Speaker Ralston knew exactly what they were doing and have no intention of doing their jobs or taking any responsibility. They are perfectly fine with allowing the local governments play the bad cop to their good cop.

This is nothing more than a pathetic shell game our legislators are trying to push off on Georgians. Expect your property taxes to go up. The State guys are just calling the gas tax something else while they restructure it to grab it all, forcing the local guys to do the dirty work while the State gets to look surprised.  Just like they did after slashing down the State contribution to the universities and colleges and  – surprise! – tuition soared and HOPE was drained.

Macon Mayor Reichert and the Bibb Commission voted to ask all nine local reps at the Capitol to vote against H.B. 107 Reichert estimates that would hit the county with an 11 million dollar loss each year. Save your pennies as you may likely need them very soon. Can someone please explain why Nathan Deal was re-elected again?

The letter below references Butts County but is equally applicable to all 159 counties in the state. Meanwhile in Colorado legalizing marijuana has been so successful that taxpayers may receive refunds due to excess revenue. Colorado tax payers should receive around $7 each.

Taxes are not something people like to discuss but one thing the majority of voters in Butts County have always supported at the polls are taxes which reduce the burdens of property tax payers with sales taxes. That funding mechanism is in danger of being gutted by the proposed HB 170 that was introduced last week in Atlanta and it’s important that Butts County citizens understand now how this could affect them.

We pay 7% sales tax in Butts County or $0.07 on every dollar spent here. So does everyone else who purchases something in Butts County, including fuel products. Three of those pennies are used to directly reduce dependence on property taxes by funding a range of local products through the sales tax. These are known as LOST, SPLOST and ESPLOST.

In Butts County, 53% of all sales tax generated here comes from the sale of motor vehicle fuels. No other county in Georgia gets over 50% of their sales tax revenues from fuel sales…no one else is even close. This means that the financial impact of HB170, which would remove sales taxes on motor fuels, could remove 53% of the dollars we receive each year from LOST, SPLOST and ESPLOST. SPLOST has been used to build our entire county water system, fire stations, soccer fields, library expansions and to renovate a number of county buildings. It has paid for patrol cars, ambulances, fire engines, road maintenance equipment and the paving of dozens of roads over the past 20 years. ESPLOST has built new elementary schools, middle schools and expansions of the high school and will soon pay for a new gymnasium on the campus of Jackson High. Without these voter-approved sales taxes, none of this would have been possible.

LOST, or the 5th penny, goes directly to the county and three cities to help offset the day-to-day costs of local government and in Butts County, it takes the place of nearly 4 mils of tax. In the cities, it helps to prevent having to impose city property taxes as well.

If HB 170 is passed with the removal of fuel sales from the three local option sales tax categories, it could cost the county $1.3 million dollars per year in LOST. It could cost Jackson $530k a year, Flovilla $111k a year and Jenkinsburg $91k per year from their budgets. Costs like these cannot be absorbed by trimming budgets…costs like these can only be absorbed by cutting jobs and eliminating services.

If HB 170 is passed, ESPLOST dollars, which fund a range of enhancements to our school system would be reduced by $1.9 million dollars per year. Before ESPLOST, if a new school had to be built, it had to be paid for by bonds which in turn were paid for with property tax dollars. ESPLOST removed that burden from property tax payers and today, probably 80% of those improvements have been made by people stopping in Butts County to fill up with fuel. Our county must have good schools to succeed and good schools must have stable and secure funding sources to make up for the gaps in what the state gives them.

HB 170 was designed to fund transportation needs throughout the state and there are some good provisions in the bill but at the point where the bill takes from the local governments to fund state initiatives for transportation, the bill no longer has the best interests of Georgians at heart. Counties own and maintain 70% of all the roads in Georgia and when you add the cities in, that number climbs into the 80% range. Its local tax dollars that maintain most of those county and cities roads.

None of our local State Representatives introduced this bill. This bill was introduced by House Leadership and they are the ones who need to hear your voices. While they say that this change imposes no new taxes on Georgians, keep in mind that it imposes no new State Taxes. What they aren’t telling you is where the funding will truly come from. You can’t create nothing out of nothing…at least human beings can’t. The money will have to come from somewhere and it is here in Butts County where the greatest percentage will come from. Butts County is Ground Zero for this debate.

Contact Georgia House leadership and let them know that you don’t support taking local dollars that local governments depend on to support state initiatives. Let them know what additional millage rates or locally imposed excise taxes in Butts County could do to harm our future. Be sure to read Buddy Costley’s editorial on the impact to the local school system and let them know how this could affect your children.

Let them know that monies raised here should stay here. As Mayor Pippin stated at the meeting held last night by all of the local governments, authorities and school board, those truck stops and the funds they generate “are our local industry”.

Our counties and cities should not have to pay the price for the state to fix the transportation problems in Georgia. They need to work with the local governments to find balanced solutions to real problems. We are willing to roll up our sleeves and work with them if they will let us.

Please share this with others. Even if you don’t agree with this, it is too important of an issue to not be heard by the people it will affect. Reach out to the House Leaders and to our two House Representatives before this bill becomes a law.

The Georgia Municipal Association has created a chart on the impact of the House-proposed Transportation Funding Act on county and city governments and local school boards. It includes the amounts those local governments would be allowed to raise through the proposed excise tax — more accurately demonstrating the gap.