James Timley , one of the top members of the Cotton Avenue Mafia, was arrested on a DUI charge but has been released. The former council president was booked into the jail at about 1:30 a.m. after being arrested by Georgia State Patrol. Al Tillman beat former Macon City Council President James Timley to represent District 9 on the Macon-Bibb County commission in the last election. The district includes much of downtown Macon and winds south to Rocky Creek Road. 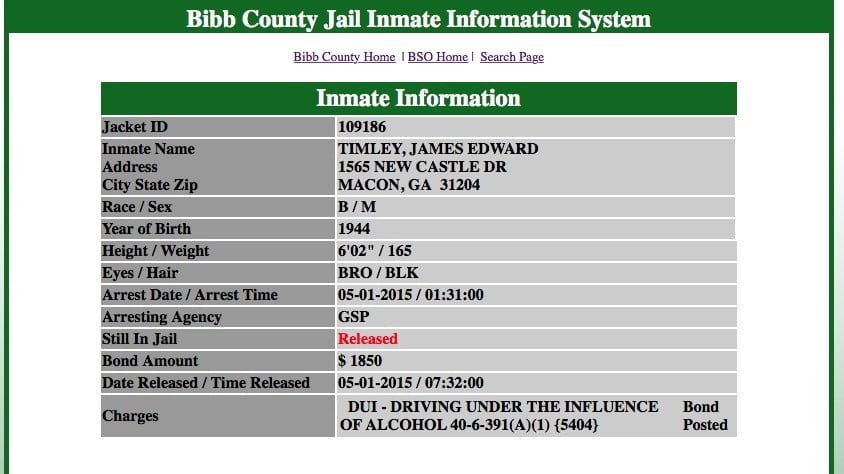 Tillman survived a residency challenge from Macon, GA City Councilman Henry Gibson on behalf of his longtime friend James Timley. Gibson, who did not run for a post in the consolidated government, complained to the Macon-Bibb County Board of Elections and Bibb County Superior Court that Tillman’s homestead property tax exemption was on a house in a different district. But they both rejected Gibson’s complaint. They found Tillman rented an apartment in District 9, paid bills there and changed his voter registration in time to qualify as a resident. 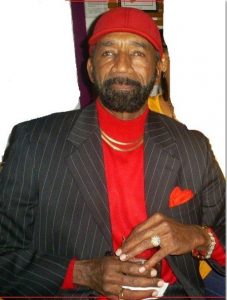 Timley is a retired educator and was a Macon councilman first elected  in 1999 Back in 2013 the WeArePolitics blog reported that Timley owed $1,000 in back taxes or fees on three houses he owned around town. The election between Tillman and Timley was a heated one with Timley considered to be a member of the so-called Cotton Avenue Mafia. An informal social group of increasingly older African-American politicians and mostly small businessmen that have wielded considerable influence in the past. Although they include the word Mafia in their name, they are more akin to the political or faction variety and not to the Cosa Nostra variety.

The Cotton Avenue Mafia’s power has been waning in recent years however as they fail to appeal to many younger African-Americans who are more interested in moving Macon forward as opposed to divisive tactics of the past where only a small group of elite members have benefited while neighborhoods languished. Trickle down economics failed at the local level just as it has at the national level.

The Cotton Avenue mafia were opposed to consolidation because they thought it would weaken their influence which was largely inside the old city limits. In one example a promising young black man, who at the time was the leader of the Bibb County Democrat party, was seemingly forced out by in a coup détat.  Later Glover would run against Elaine Lucas but once again rumors of some very dirty politics by way of news leaks and rumors of Cotton Avenue Mafia involvement forced him out of the race—and even out of the state.

In recent years—-many of the issues and candidates CAM have supported have not fared well on election day. The defeat of David Lucas by Miriam Paris in the  2011 special election to fill the seat vacated by Senator Robert Brown ushered in the consolidation of Macon and Bibb County which the Mafia vigorously opposed.

Brown resigned from the senate in 2011 to run for mayor and Lucas resigned his house seat to run for Brown’s senate seat. The Mafia’s “Grand Plan” was for Brown to become mayor and with Lucas in the senate, there would be no consolidation. This was the most strategic blunder in the history of Macon politics. As we all now know, Miriam Paris was elected to the senate, consolidation was put on the ballot by the delegation with her support and Brown placed a distant 3rd with an embarrassing 9% of the vote in the mayor’s race.

Also, Dr. James Beverly won in the special election for Lucas’ house seat and he supported consolidation as well.  Consolidation passed in July of 2012 and Robert Reichert was elected the first mayor of the Consolidated Government of Macon and Bibb County. The Grand Plan became the Grand Blunder by the Cotton Avenue Mafia.

There is no complete official membership list per se in such an informal cabal like this so this is sheer speculation. It is also a fluid membership with some leaving and joining. I have heard they continue to have weekly meetings where everyone is welcome to attend, but real decisions are likely made behind closed doors and in private conversations.

According to numerous  sources I have spoken with these names are mentioned the most often as wielding influence within this network.  David Lucas, Tom Hudson, Cliffard Whitby, Bill Barnes, Tommy Barnes, Virgil Watkins, Billy Pitts, Connie Cater, Walter Timley, James Timley, Henry Gibson, Henry Gibbs,  Virgil Adams, Jimmy Mills, Herbert Dennard, Sam Hart and Andy Galloway. Many in this group are also board of director members for the 100 Black Men of Macon organization as well.

The Cotton Avenue Mafia is officially a mens group so Elaine Lucas is technically not a member but because her husband is a member she certainly has a prominent voice and exerts influence. The idea of a mens only group alone is something of an anathema to strong African-American women and rightly so. Macon needs a new group open to all genders and all races and not an exclusionary group primarily based on gender and race to join. The Us vs. Them mentality pushed by these sorts of groups needs to cease if Macon truly wants to start a new chapter of growth and march towards prosperity united as a community instead of special interest factions led by myopic megalomaniacs.

Some of the names listed may no longer be as active now as in the past. Some may also be only part-time or peripheral members while others work in lock-step.  The list above are a collection of names I have gathered  over months from numerous sources which prefer to remain anonymous. It is certainly not a complete list by any means and if there are errors please let us know in the comment section.

Another reason the Cotton Avenue Mafia’s influence has been waning in recent years could be due to rumors of a civil war among t factions with competing interests which has resulted in a lot of infighting. The once very secretive group is spilling a lot of beans recently which assisted greatly in this article. Petty jealousies and a desire for revenge is often a good incentive to open Pandora’s box by reaching out to the media.

The Dallemand debacle also caused some fractures among certain members especially with the newest lawsuits possibly revealing things some would prefer stay hidden.  Some members are also just getting older and less involved in politics. Some with larger than life egos have also rubbed others the wrong way for too long. Decades old resentments are bubbling to the surface as is often the case in acrimonious divorces.

Fortunately many younger African-American citizens in Bibb County view the old Cotton Avenue Mafia  group askance, as a relic from the past and also a cause of many failed policies that have hurt Macon for decades. They also view these type of private cabals as a hinderance to Macon moving forward which means people of all races must work together towards that goal.

Georgia sunshine laws, an aging and less influential membership, insistence on transparency and accountability by the public, a burgeoning fifth estate, and changing values might also serve to be the final nail in the coffin for the Cotton Avenue Mafia.

Perhaps Atlanta’s motto of “A city too busy to hate” has finally managed to travel down I-75  and began to have an effect on Bibb County’s population as well. The decline of exclusionary groups demanding preferential treatment certainly is a good sign that it has.

Younger generations also are far less likely to use stereotypes or use inflammatory language to win elections. They are also far more likely to have friends of other races and not judge someone based on their skin color but on the content of their character. A dream we are still trying to realize 50 years after MLK’s speech and one easier achieved with fewer divisive groups with a vision anchored firmly in the past. It is hard to unite people stuck in the past and this applies to all races but fortunately the younger folk are ushering in a new path of cooperation.

Macon, GA is textbook example of a small Southern town that has been in decline for decades as the ones largely responsible desperately cling to power. Macon is acutely in need of new blood willing to run and serve for public office who owe loyalty to their constituents and not to their pocketbooks or to serve for vainglory. People that can see the big picture and take the necessary steps to address so many fundamental issues starting with education, crime, and sustainable growth. Macon has all the necessary ingredients for growth but needs a lot of new chefs willing to throw out the old menu and start fresh.

Only a new crop of public servants  from all races will allow a truce between decades-old grudges and ideological intransigence as represented by many in the Cotton Avenue Mafia and similar groups. The paranoia is palpable among those too old and set in their ways to change. People like Al Tillman and his Ban the Box initiative are a refreshing change, but many more like him are needed. I have also corresponded with Senators Vincent Fort and Nan Orrock from Atlanta who sponsored some maverick laws which I think is a step in the right direction. People with fresh ideas are needed not only in Macon but at the capitol as well.

If Macon, GA ever manages to extricate itself from people that can’t see beyond black or white and realizes that the color green is the only one that should matter— it’s future could be very bright indeed.