The Gillis family has always been a Middle-Georgia bedrock of community pride.  There are many famous Gillis’s in the Laurens County community:  in 2003, the Georgia Legislature passed a resolution to designate Interstate 16 as the Jim Gillis Historic Savannah Parkway in honor of James L. Gillis, Sr., a Democrat who served as a State Representative, State Senator and Director of the Georgia Department of Transportation. His sons Hugh and James, Jr., also served as Democratic State legislators. Hugh, a Representative from 1941 to 1953 and a State Senator from 1953 to 1955 and from 1963 to 2005, and James, Jr. was a State Senator from 1945 to 1946.

Carl Gillis, a relative of Jim Gillis, started a pre-fab housing business in Adrian, Georgia – just outside of Dublin.  His son, Gil Gillis, a prominent Republican and business man extraordinaire in Dublin, runs a studio, among other things, out of which Bill Perry hosted a local radio talk-show—where they discussed the contentious issue of gay-marriage and other right-wing business and political topics of the day.  In many ways, Gil Gillis has played a part in reaching out to the local community in Dublin.  Gil Gillis’s family name is on I-16, the Interstate that links Dublin to the rest of the world. Gil has helped local Bill Perry (Nancy Perry’s husband) get his views out to the Dublin public, and Gil does not shy away from expressing his views, either.  Recently, Gil Gillis let it be known, publicly, that he agrees with Nancy Perry that our President is not a Christian for the following seven reasons: 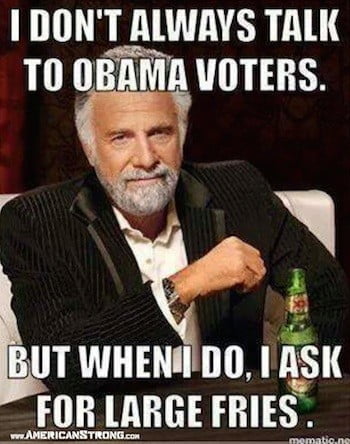 Is Gil speaking for the Dublin Business Community when he denounces our President Obama as a non-Christian? One need only look at Gil Gillis’s public postings and one can see Gil thinks most people who vote for President Obama work at something like a McDonald’s selling french fries.  What does this mean, Gil? Is that the local Dublin McDonald’s you are talking about Gil?  The picture to the left is what Gil Gillis has to welcome people to his website page.

Gil Gillis  wrote in a recent thread “The Laurens County Georgia Democratic Party Facebook page told me I was not a Christian. I didn’t know that. Jesus said I am. I think I will stick with Jesus’s decision. Obama is a devil.”

There is a large section of business-minded Dubliners who have spent a lot of time and effort over the years into bringing International Business into their community:  YKK (the Japanese zipper and house-siding manufacturer), Mage Solar (a German solar panel manufacturer), Dinex (a Danish exhaust manufacturer) Valmiera (a Latvian glass manufacture).  Now that corporations in the US seem to be able to hold religious views – local business man Gil Gills extraordinaire probably has a view of how Christian these businesses are.  He certainly has one about our President Obama.  How can a community in Dublin’s position allow local public school teachers, such as Nancy Perry, and local business men, like Gil Gillis, degrade the voting choices of the citizens of Laurens County?

How can Dublin let these three voices represent Dublin and Laurens County and still expect to remain attractive to serious big international business?  Who speaks for Dublin – the likes of Gil Gillis and Bill and Nancy Perry? – or the people who are striving to make Dublin a place for everyone, including people like President Obama, the people who voted for him, including gay and straight people harmoniously, and the International Businesses who depend on common sense to prevail in their local communities?  From listening to these three, Nancy Bill and Gil, it seems there is no welcoming room in Dublin for anyone but “their” kind of Christians.

Is there now a Christian-Mafia, a Christian ISIS, a Christian Taliban, ready to run certain undesirable Non-Christians out of Dublin and Laurens County? Are they trying to bully the people in Dublin to vote a certain way? Is this how Dublin welcomes people who are different?  We have all heard Nancy and Bill and Gil – are they the three-stooges voices of Dublin Georgia and Laurens County?  Is this how Dublin is going to advance itself into a bright future for everyone in the community? or are we going back to the regrettable times of the Salem Witch Trials and Lynch-Mob rule?  As Bill Perry, Nancy Perry’s husband and local radio talk-show host has stated in the local paper, we are all eagerly awaiting to hear how “strongly” Bill Perry will be responding to what his teacher-wife has instigated in her classroom.  For some reason, the Perry’s advisers have told them not to comment.  Bill Perry, nevertheless, has promised us “more.”  Is there such a word as “triple-down” and, if so, does that make Bill, Gill and Nancy the Three Stooges?
Concerned Middle Georgians want to know.