This is a follow-up article to Who has been terrorizing fishermen at Lake Tobesofkee in Macon, GA.

I have been told that Dr. Ghali might have lost Wael possibly last year and he is deceased. If that is true, the entire Ghali family have my deepest and my most sincerely heartfelt sympathies. I have lost loved ones as well and I understand the intense pain from that kind of loss. My intention is not to add to their grief. But I strongly encourage any Ghali family member  to come forward so all of this can be resolved. Remaining silent will only make things worse. Anyone that has any information really needs to speak with the Bibb County Sheriff’s office immediately before someone is injured.

This will not blow over or go away until the assailant is apprehended. I am neither a racist nor an Islamophobe in the slightest. Let me be absolutely clear on that point. I am neither blaming a race nor a religion for the shooting at Lake Tobesofkeee.  A religion didn’t fire those shots but a very disturbed human being did. I am simply seeking justice for the fishermen. Additionally I am concerned that until an arrest is made there is a risk to the public safety. 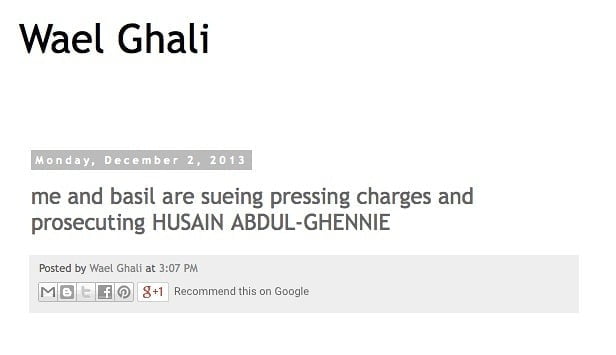 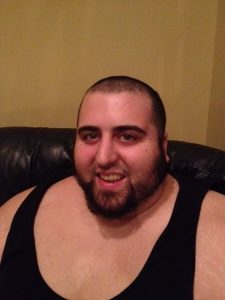 While doing my research I stumbled upon a very cryptic blog by Wael Ghali. Peppered all throughout the blog were the words “Sueing Pressing Charges and Prosecuting”. I am confident this is the same Wael Ghali that lives in Macon for a few reasons. There is a mention of Basil Ghali as well as references to Atlanta and Detroit sports teams. They lived in Michigan prior to moving to Georgia. Several other family members are also mentioned which leads me to believe this isn’t some other person.

I also found this line in the blog.

“Mahdi was resurrected to lead all Muslims”

In Islamic eschatology, the Mahdi (Arabic: مهدي‎,: mahdī “guided one”) is the prophesied redeemer of Islam who will rule for seven, nine, or nineteen years (according to differing interpretations) before the Day of Judgment (yawm al-qiyamah / literally, the Day of Resurrection) and will rid the world of evil. 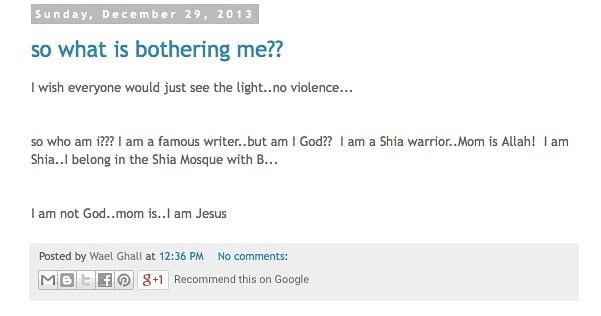 Could the B stand for Basil?

In a blog post called New Song he calls himself the king kong Ghali.

I need a new love like Pamela chillen in the cabaza with my boy Sam, like hot damn, we closer than two peas in a pod like a hot rod, a lambourginni and a massage from the finest massiuts, play the flute, its wael the fuckin king kong ghali, chillen with his hands on a new car every night, hear his cry when he fights, when he conquers, the world on his shoulders, and his brain, no hes not insane, but i know who he is, but i wont say a name, thats my sister nermin, she aint got no life, but ive moved on with my life, gonna make a police report or three to get my boys off the streets so we can run a 1-2 on some peeps, man you know I go deep bleep sleep creep and blood comin down i dont frown, i just mug, i plug it up, like a buttplug if you fuck with me ill go ham on a nigga like godzilla and the incredible hulk,

hear my roar, fuck al gore, and clinton too, where my boo, pm come give me a kiss i really miss please dont diss you are my baby every single night i fight for you, i bleed and creep for you,  you are my baby i miss you movin soon move in with me babe, you know ill clean, fuck nermin, she aint shit, cuz i miss you sweetie pm i will always be there for you, like the sky is blue, like a cow moo,

Who is Anton James?

I also found an additional blog. Like the one by Wael above this is one has the words “Sueing Pressing Charges and Prosecuting” scattered randomly and abundantly throughout the blog. These words usually appear to include random items like protein shakes, aderol, Febreeze, and even toilet paper. Although my name is Alan, my last name isn’t Turing so I am no cryptographer. But, this certainly would seem to suggest some sort of code. A few examples in case the Anton James blog is removed. I have no idea if these blogs were created by the same person or not but they are certainly bizarre. 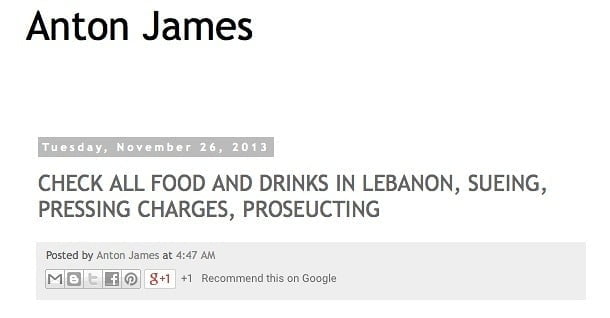 If you are wondering what a blog by Anton James has to do with any of the Ghali family that is what I first thought until I saw this rap song with Kinnan mentioned along with several other Ghali family members. The song is called New Song For My Brother.  I will let the words of the song speak by itself. 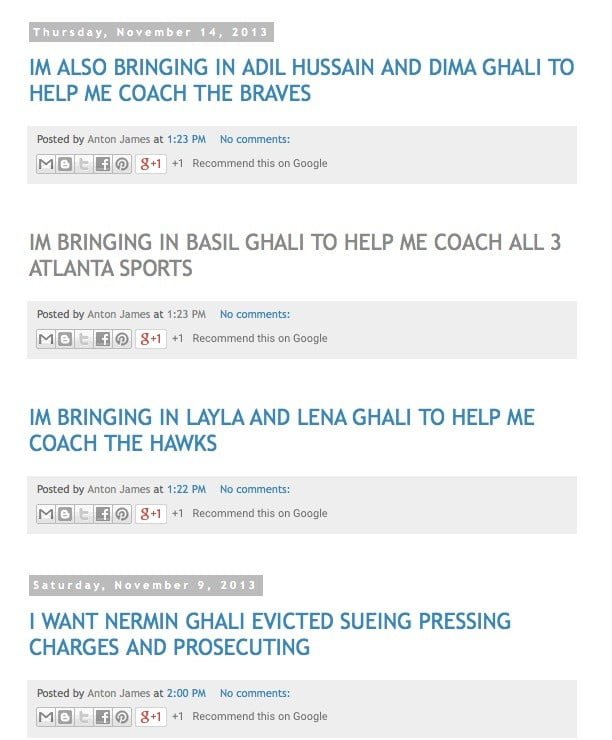 NEW SONG FOR MY BROTHER

we both were swole like bodybuilders we get the hottest girls

even hotter than marisa miller

we were both so close so please dont go

i miss you so, i miss you so much
ill take you out to heat, hell ill take you out to lunch
my love for you will never subside
i dont know what id do if you died
please come back and stay the right way
all day all night singing like the frey
making rhymes like your birthday, its in may
listen what i say but not adam sandler
we both handled our demons, together we were handlers
now as we get older, pops getting big
sip on some scissorp and eat some figs
gotta check all that shit from the terrorists
keep it clean, keep it kool
take a vacation but dont go there, if you go, you might be able to come back
here me rap, i dont talk smack
but if someone says the wrong words, hell ill snap
now i keep rappin and rappin my shit
so i thought id take time a lil bit
and tell you all about the bombings that they hit
they might look for you, not unless you go to Lebanon
hurt me when you fight with your brother kinnan
dont forget about us, dont forget about mom
im dont with this song, its a fuckin rap
dont go to Syria, it’s a fuckin trap 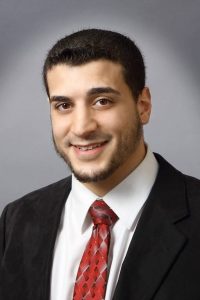 I also found two Facebook accounts for Kinan Ghali. One account has  Dallas.Ghali in the URL and another with Kinnan.Ghali in the name which appears more recent since he has an older photo of himself with facial hair. The one with Dallas also doesn’t have any posts visible past 2013 while the one with his real name has posts from this month visible.

In the most recent Facebook post.  It is a cite to a recitation of the second chapter among 114 in the Quran, the Surah Baqara (Kinnan’s spelling).  According to Wikipedia, its “major theme is guidance: urging the pagans (Al-Mushrikeen) and the Jews of Medina to embrace Islam, and warning them and the hypocrites of the fate God had visited in the past on those who failed to heed His call.”  Among other things, this chapter calls Christians Nazarenes instead of People of the Book, the Nazarene label being a relatively deprecatory appellation.

That’s possibly significant because the chapter also highlights the role of holy fighting, specifically in verse 216, the famous so-called “jihad” verse that has been variously translated according to Wikipedia as follows:

“ To fight in the cause of Truth is one of the highest forms of charity. What can you offer that is more precious than your own life? But here again the limitations come in. If you are a mere brawler, or a selfish aggressive person, or a vainglorious bully, you deserve the highest censure.

This is getting curiouser and curiouser by the day….

This is one of the videos posted on Kinnan’s Facebook page.