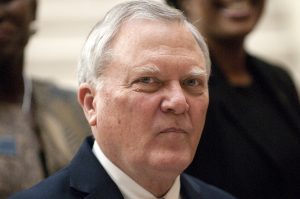 Last year before the election we reported on a company named Copart that owed Georgia millions in back taxes. The reason this was especially newsworthy was due to the close business ties Copart Inc. had with Governor Nathan Deal.

In 2013 Nathan Deal set up a blind trust to sell his business then known as  Gainesville Salvage Disposal  to Copart which is a Texas based company that owed Georgia $74M in back taxes and penalties.

Fast forward to 2015 and guess who still owes that $74 million in taxes? It’s good to be governor it seems or to at least bail out his failing business after it loses the sweetheart monopoly arrangement that allowed it to be profitable.  Deal was charging inspection fees at a far higher rate than anyone else in the state. Once scrutiny and some spotlight was focused on his contract with the state and competitors were allowed in, Deal suddenly became anxious to sell the business because he knew he couldn’t compete with legitimate companies on a level playing field.

Many of you will recall this was also the reason he quit Congress literally minutes before a deadline that would have required the ethics committee to take action on some very serious findings involving this very same family salvage business. After he quit Congress there was nothing the Ethics Committee could do to sanction Nathan Deal further but they went ahead with their investigation and published their 160 page report which blasted him for numerous egregious violations. Had he stayed he would have likely been removed from Congress and possibly suffered far more severe consequences. But instead Georgia elected him Governor where he could control those pesky ethics committees from then on.

Funny how Copart found all that money to donate to Deal’s re-election but can’t find any to pay the taxes they owe.  It’s also strange how Deal and his partner Ken Cronan’s $20,000 combined monthly checks from Copart keep rolling in. I wonder how fast Copart would get a tax bill for $74 million if they missed a monthly payment to Governor Deal.

According to the latest Securities and Exchange Commission filings on May 28, 2015, Copart, Inc., the company that bought Gov. Deal’s failing junk yard for $6.4 million, still owes Georgia more than $74 million dollars in back taxes and have owed this money for eight years.

During his campaign for re-election, Gov. Deal promised to collect “every cent (Copart) owes in Georgia taxes.”

Copart, which rents property from Gov. Deal and his business partner for $20,000 per month, has owed the taxes since 2007. That is a nice monthly residual income the Guv has coming in every month.

Both Riley and O’Neal previously served as the governor’s floor leaders before their recent appointments by Deal.

The Georgia Department of Revenue has records related to the millions of dollars Copart, Inc. owes to the state, but they’ve set a price of $4 million dollars for access to those documents.

Don’t expect Copart to cough any money for those taxes anytime soon however. But if you are a Georgia resident that owes even $100 dollars in back taxes you can count on receiving threatening demand letters and likely with a big penalty as well.

Don’t you just love these double standards? But then again Congressman and now Governor Deal has always been more of as “Do as I say not as I do” type of guy. If you are surprised you really haven’t been paying much attention.

Are Georgian’s Getting a Raw Deal From our Governor?

How Nathan Deal Became a Millionaire

Governor Deal and the Longest Corruption Scandal in Georgia History

Everything Peachy in Georgia if you Live in Hall County

Nathan Deal Steps in it again with Copart