Two happy graduates with their whole life in front of them after graduation. Will an overzealous D.A. destroy their future with a bogus criminal gang activity charge?

Today another person involved in the Walmart ransacking turning himself in. This story made national news though the damage they caused was relatively minor at $2,000 considering around 70 people ranging in age from teens to early 20’s were involved. I wrote this article because I felt the inclusion of Criminal Street Gang Activity was a bad decision that doesn’t fit the particulars of this incident.

How many criminal gangs do you know that run in a Wal-Mart, not steal anything, and then leave a few minutes later after knocking over and damaging some items? Was it stupid? Yes. Was it planned? Yes. Was it consistent with criminal gang activity? Absolutely not!

Don’t get me wrong, what they did was wrong and I am not suggesting they get away with it without being punished. But my question is how severely do we want to punish them? Does this prank involving vandalism, and let’s be quite honest because that is exactly what it was, warrant jail time or a felony record that will ruin any hope of a future? The charges announced in the press release seem way over the top.

“Another suspect turned himself over to the Bibb County Sheriff’s Office in connection to the June 28th incident that took place at a local Walmart, located on Zebulon Road. Lekelvin Lamont Renfroe, age 20 from Macon, turned himself in at around 9:00a.m., Tuesday for several warrants related to the Walmart incident.

Renfroe has been charged for Riot, Criminal Damage to Property- 2nd Degree, and Criminal Street Gang Activity. Renfroe is currently being held at the Bibb County Law Enforcement Center without bond. A bond cannot be set until Renfroe goes before a Superior Court Judge.”

Renfroe joins Vashaun Chandler Rozier, 18, from Lizella,  Kharron Nathan Green, 17, and Hajj-Malik Markavelli Renfroe, 18 as people involved that have turned themselves in.

I am concerned about the severity of the charges: Criminal Damage to Property- 2nd Degree, and Criminal Street Gang Activity. Really??? That sure seems overly harsh to me Sheriff Davis and District Attorney Cooke. I strongly advise you to reconsider reducing those charges to be more appropriate to this incident and not try to throw in additional charges just because you can. 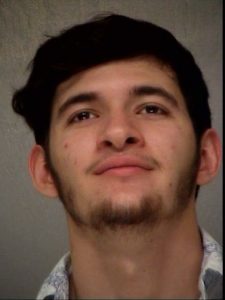 No jail Time for Vehicular Homicide

The reason this concerns me is two other recent cases. One was Mercer Basketball Coach Bob Hoffman’s son Grant Hoffman that received no jail time, he got first offender status and probation and can keep his driver’s license for reckless homicide and vehicular homicide. This guy killed someone and might receive a lighter sentence than some kids running through Wal-mart that damaged $2,000 in merchandise. That doesn’t sit right with me.

The other cases that come to mind is the vandalism committed by Mercer University students which resulted in $8,000 worth of damage to statues. That is FOUR TIMES the amount of damages committed by those 70 or so at Wal-Mart.

Two Mercer students averaged $4,000 in damages each. By comparison, the 70 Wal-Mart vandals averages out to $28.57 per person in destruction.

This wasn’t the first time either, back in 2011 two other Mercer students were arrested after kicking the bear statue off of the platform. these bear statues costs around $3,000 to $5,000 each. I have been unable to find an update as to the charges for those students that stole and vandalized the bears. At the time of the arrest Mercer said they would work with the Macon Arts Alliance to replace the statues. Like the Wal-Mart incident, I think they should make restitution and also do a lot of community service. I do not think felonies on their records fits the crime anymore than it does for the Wal-Mart incident.

Two wrongs don’t make a right. I am not using those cases to justify the $2,000 in damages done at Wal-Mart.  David Oedel wrote an article called Who are the real gang leaders? In this article he argues that giving extra time for gang-affiliated crimes may be unconstitutional as applied in Middle Georgia’s setting.

If our prosecutors really want to get serious, they’d quit hounding people like Johntellis Mathis and instead get Cliffard Whitby and Romain Dallemand under oath – and a few other players as well – to get to the bottom of the big-money mischief.

If we’re talking about the practical difficulties of getting after the big-money types, then using the gang law might make some sense. Until then, persecuting poor non-felons in the hood looks like shooting fish in a very small barrel. Our prosecutors, police and judiciary can, and should, do better.

Will sending these young people to jail and throwing the book at them help them see the error of their ways or give them a chance to ever lead a productive life? The one thing I am certain of is that Prison University is the best university in the country when it comes to educating their “students.”

By the time most leave, even if they entered for non-violent minor charges, if they stay in there long enough they will leave as hardened and often violent criminals. Young people are especially at risk for being raped and abused.

Yes, these young people at Wal-Mart need to be punished. Restitution needs to be made to Wal-mart but I am very uncomfortable at throwing the book at them to the maximum when we could be far more creative by making them do community service. You don’t turn kids around by sending them to jail or giving them a felony arrest which will basically ruin any chance they have of ever turning things around.

If the crime in non-violent and the damages are relatively minor, we need to start being more creative with sentencing to try and reach these kids before we turn them into hardened and career criminals because that is exactly what we have been doing.

Both in raw numbers and by percentage of the population, the United States has the most prisoners of any developed country in the world — and it has the largest total prison population of any nation. According to the U.S. Bureau of Justice Statistics (BJS), 2,266,800 adults were incarcerated in U.S. federal and state prisons, and county jails at year-end 2011 – about 0.94% of adults in the U.S. resident population.

Additionally, 4,814,200 adults at year-end 2011 were on probation or on parole. How long are we going to keep feeding these for-profit private prisons who demand new inmates, disproportionately poor and black, to keep their stockholders happy?

All incarcerations do for non-violent crimes is to ensure we train them how to turn violent once they are released. It is nearly impossible to get a decent or any job once you have an arrest record. Thank to the PhD. they received at Prison U., often the only choice they have is to break the law or starve or become homeless. Should one stupid mistake change the course of their entire future? Justice must be color blind.

It’s time to stop the madness. Instead of sending these young people to jail, make them pay back Wal-mart for restitution and make them clean up blighted neighborhoods or something else more fitting.

I am not saying these kids are angels, but if we keep the same mentality of punishing them this severely we are only cutting off our own nose to spite our face. Can we please stop the insanity and realize nearly all these young people we are sending to jails and prisons will be released one day.

We are only training every single one of them to be far worse when they get out. We need to find a new and better way because we can’t afford to keep incarcerating and paying for around 7,000,000 million Americans either behind bars or with an arrest record that prevents them from any viable future or gainful employment.

We are only hurting ourselves with this type of unreasonable sentencing and it has to stop. Let’s start in Macon, GA. Reduce those charges and the punishment to one that is more appropriate.