Just before Nathan Deal gets ready for his inauguration ball he decided to participate in an event called “With a Servant’s Heart: A Day of Service” and just to be clear that was very apt name. It was  ONE day of service. But before I jump in to that, let me give you a few key facts about his inauguration ball.

According to the AJC, Deal’s 2011 inaugural events cost $1.25 million. Back then, the governor raised more than $1.7 million to cover the costs, more than half of the tally coming from donors affiliated with lobbyists.

Georgia ethics rules don’t require the disclosure of inaugural committees, though most recent administrations have released key details. Deal spokeswoman Jen Talaber said there was no timetable yet on the release of the information, but said they will be outlined in required tax forms.

While we don’t know the names of the inauguration’s key funders, we can bet Georgia’s corporate titans are ponying up. Case in point: Coca-Cola on Tuesday is set to announce it will produce an 8 oz. glass bottle made specially for the bash.

So we can assume the 2015 ball will be in the neighborhood of around $1.25 million and we can also safely assume the lobbyist will be ponying up for this one as well. If you think lobbyist give away money out of the goodness of their heart I have a bridge to sell you. Take a look at how our own state agency the USG has the largest group of lobbyist nicknamed Regents Row lobbying another state entity for funds. They give away tickets to football games in exchange for leaving their budgets alone or increasing them. Now how screwed up is that? Bet the bank that for every $1 a lobbyist spend on this geezer ball they expect $10 back in return.

If you are curious how the state of Georgia is doing on the budget the answer is not good. Georgia is officially classified as a sinkhole state. What that means is Georgia owes $29.4B and owns $15.7B. The state of Georgia is sinking in debt. The $13.8B shortfall represents compensation and other costs that have been pushed into the future. 89% of retirement liabilities are not clearly disclosed which total around $12.8B. To sum that all up for you, if Georgia were a person we would be homeless or in debtors prison if they still existed and would not want to take advantage of the free credit check advertised in those Credit Karma commercials you see on TV.

So please explain to me why we need a $1.3 million dollar inauguration ball at all? A chance for a lot of old, rich, white men and women to relive their glory days of their bon hommes and debutant ball days of youth many decades ago in the 1950’s. Now that million would’t put a dent in our state deficit but it would go along way to a desperately poor rural school or hospital  or other worthy recipients in the state. They could still have a celebration just scale it down to something less majestic and imperial and let the ticket cost cost the event entirely.

With a Servant’s Heart: A Day of Service. Yeah right… 🙄 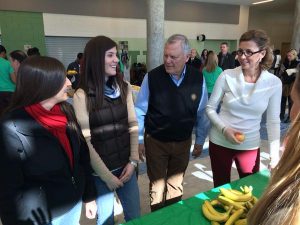 More like a day to pretend he gives a damn and to take some great photos. Take a look at the Facebook page for this event. Don’t get me wrong, I am all for charities and helping the needy out but I have this weird idea that they need help 365 days a year and not just one to provide a few great photo-ops and a checkmark to say you were a good person this year. Where is Nathan Deal as all the rural hospitals have been closing? Where is Nathan Deal to help all the unemployed Georgians find work? Where is Nathan Deal when he refuses to take the sweetheart deal from the feds to expand medicaid? The answer you are looking for is MIA because our state is in a mess and he hasn’t done a whole hell of of a lot to improve things. But as long as people in Georgia care more about the letter by your name than the candidate we are destined to elect more like him unfortunately. All pomp and show and bad circumstance.

I am not even sure what Governor Deal was even doing to “help” at this event. All I saw were pictures of him walking around and talking to people. It beggers real belief that people like Nathan Deal who are in a position to make a real difference in the lives of the infirmed, malnourished, underprivileged, unfortunate, destitute, outcastes, poverty stricken etc are instead showing up at one event under the pretext of doing the same thing they are otherwise mandated to do. His goodwill seems superficial and also callous with the sheer audacity of putting on such an obvious staged publicity stunt. So yeah that degree of blatant hypocrisy manufactured for cameras  made me more than a little angry.

Since Deal mentions his Christian values so frequently, I decided to see what the Bible has to say that might apply to Nathan Deal.

You hypocrite, first take the log out of your own eye, and then you will see clearly to take the speck out of your brother’s eye. Matt. 7:5

Beware of practicing your righteousness before other people in order to be seen by them, for then you will have no reward from your Father who is in heaven. Matt. 6:1

Having the appearance of godliness, but denying its power. Avoid such people. 2 Timothy 3:5

For such persons do not serve our Lord Christ, but their own appetites, and by smooth talk and flattery they deceive the hearts of the naive. Romans 16:18

If there is a poor man among your brothers in any of the towns of the land that the LORD your God is giving you, do not be hardhearted or tightfisted toward your poor brother. There will always be poor people in the land. Therefore I command you to be openhanded toward your brothers and toward the poor and needy in your land. Deut. 15:7,11

A generous man will himself be blessed, for he shares his food with the poor. Prov. 22:9

There are many other verses that might be just as appropriate but I think those few make my point. I was inspired to write this article simply because Deal’s minions were flooding twitter and other venues with all of these sickening tweets that included cheap photo ops trying to portray Nathan Deal as some sort of saint when he has been anything but. They congratulated him on for a publicity stunt which feeds into the narrative and becomes as Stephen Colbert would say “Truthiness”.

He has not been a friend to the poor these last few years and many would say he has been their biggest enemy. The poor have been largely pushed to the side and ignored or marginalized.  For him to take this opportunity to go to some event a few days before his million dollar geezer ball © paid for by lobbyists expecting their donation to be paid back many fold over simply made me sick to my stomach. I was hoping someone else would notice and write about this hypocrisy and pandering, but I guess it was left up to me.

Mr. Deal, if you want to help the people of Georgia out just remember one simple fact. They need help the other 364 days in the year as well.